This Stand Mixer, or the Other One? 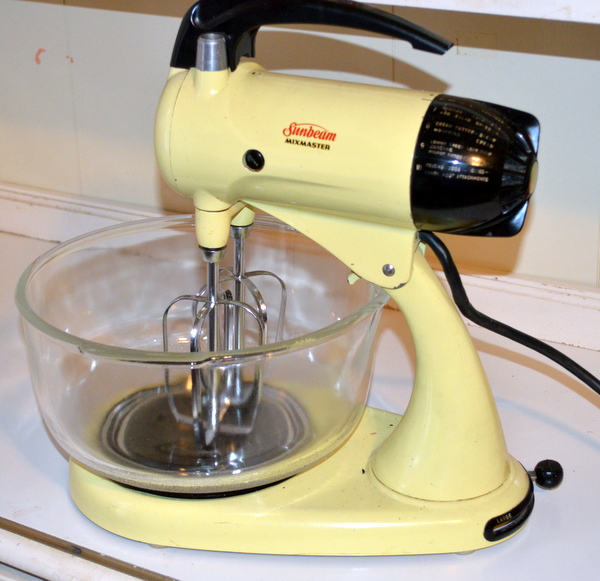 Somehow, I'd manged to live my entire life without ever using a stand mixer (or an electric hand mixer, for that matter.)  Something about them is intimidating, so I stick to the wooden spoon and the whisk and if I'm really feeling motivated I might pull out Hubby's fancy Bosch.  Please don't ask me to explain why the Bosch is okay and a stand mixer isn't. I have no idea.

I've gotten along just fine, but now I've got two vintage Sunbeam mixers in my kitchen and I've got to give one of them up to my daughter, just as soon as I decide which one I like best.

That means using them. Both of them.

This looks like the older of the two and, given the choice, I'll usually pick the older one just because it's older.

I wound up using this one to make Strawberry Jello Poke Cake, mostly because it was the first thing I found on my Pinterest board that called for a mixer. I had to figure out the hard way which beater went on which side and what that lever on the back of the base is for, but I made a cake!  It wasn't photogenic, but the boys scarfed it down.

That's a beauty. Looks like you have the beaters in correctly.

Bosch I am lost here I know this as a brand name for dishwashers but I am very sure that is not what you are talking about
The mixer you pictured is very much like the one my mother had and I used all the time as a young girl.
Ours was white and I don't remember a knob on the back, I do remember finically being strong enough to "hit" the handle
hard enough to release the beaters and of course licking the beaters
Colleen

I bought a very similar-looking mixer at a yard sale, and it now graces a spot above my cabinets. I'd have to get the ladder out to reach it, so it's just a good reminder of days gone by. Glad your boys enjoyed the treat!

I have the same mixer in avocado green that I inherited from my mom. Love it. Use it mostly for cookies, cakes and mashed potatoes. Works great. Before this one I had a white one made in the early 1960s. Loved it too.

I like the look of them, but they intimidate me too! And somehow our old one always smells like it's on fire while I'm using it. I'll stick with the whisk, lol.
Michelle, for some reason your comment on my blog didn't go to my email - I have no idea why. I'm not a fan of daffodils either, lol, I think you're the first person I know that feels like I do about them!

Ha, ha, I am smiling! Can't believe you've never used an electric mixer. I use one constantly. But I do a lot of things the old fashioned way too, so who am I to judge. :) I have a red kitchenaid, but just came across and aqua mixer like this one. Had to keep it. I love this and I think I see you using it again in the future. (wink) Thanks for sharing with SYC.
hugs,
Jann