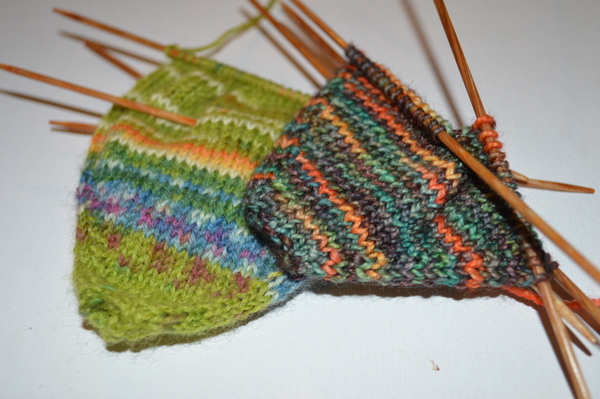 I gave up. I quit. I said that I couldn't do it. Basically, I did all of those things we're told not to let our kids do. And I'm much happier as a result. I think. After so many months of waiting for Sock Madness, I wish I'd made it farther than the warm up round.

Maybe I could have finished the Twisted Madness socks. Hundreds and hundreds of other knitters did finish theirs. Instead, I made the decision to rip out hours of work and cast on for something new. And to cast on another pair of socks. And to finish those second socks I posted about earlier this month.

Like I said, I think I'm happier as a result. And even if I didn't make it far enough to get assigned to a team, I did manage to do colorwork.

For Whom the Bread Rolls by Sarah Fox

When the Flip Side pancake house is targeted by vandalism and prank calls, new owner Marley McKinney decides to confront the woman responsible. Instead of the peaceful resolution she hoped for, she finds the older woman's body and becomes a suspect herself. My reaction to this one was kind of lukewarm. The vandalism was intriguing, but the other elements of the mystery weren't. Or maybe it's just because I live in the neck of the woods were that sort of thing is more expected than surprising.

Disclosure -- I was provided with an advance review copies by the publishers. All opinions are my own. This post is linked to Patchwork Times, Yarn Along, Crazy Mom Quilts , Wrap up Friday
Posted by Michelle at 4:00 AM

There are things we shouldn't quit and things it's okay to quit. It turned out you weren't "feeling it," you aren't hurting anyone by dropping it, and you're freeing up your time to do things that you want to do (or even just to relax), which is a great feeling.

There was an event in my quilt guild this year where you make something for another member and a (potentially different) member makes something for you. I knew if I did it, I'd *have* to follow through. So I didn't sign up for it. I was so glad. I was able to watch people open up their things, and I enjoyed that, but I didn't have months of "What should I make? Will the person like it? Is it enough? Is it too much?" self-questioning. It was a relief!

It's okay to say no to things, and it's okay to drop things when it ultimately hurts no one to do so. Both are a way of simplifying our lives and lowering the stress. You do your thing! :)

I always tell my daughter - If it's a commitment that will effect others, you need to see it through. If not, if it was just for fun or for the experience of it, then it's okay to decide it's not worth your time:) Sounds like you made the right decision!!