I need more bags. Lots more bags. As many as I've got around this house, there are never enough empty ones handy to haul everything we need to take with us. Add the single use grocery bag bans in a couple of the larger towns near us and now I apparently need to carry empty bags in both vehicles. 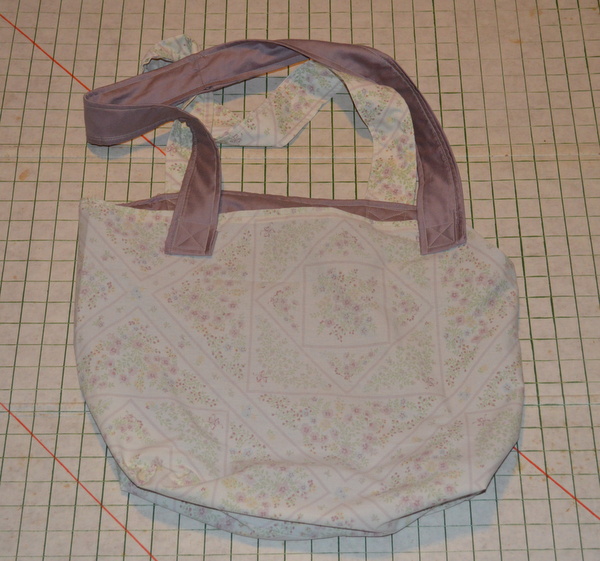 So the idea was to use existing pillowcases to make nice, sturdy bags with as little waste and extra sewing as possible. I used a lot of the same techniques as I'd use to make a bag from scratch and cut corners by using the existing seams and measurements.  Now I'm on the prowl for some pillowcases in brighter prints because I want more of these. A lot more.


Start with two pillowcases, both the same size. You're going to lose whatever pretty details are along the cuff, so save the ones with fancy embroidery or lace trim for a different project. For this bag, we want fabric with a lot of life left in it. Vintage bedding can be worn thin, so take a careful look before buying it. 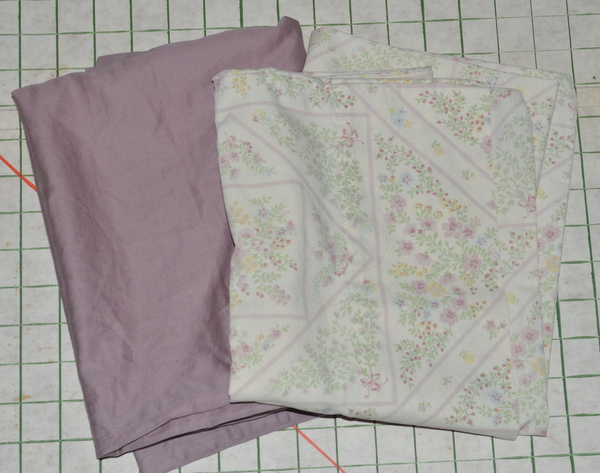 Cut each pillowcase into three pieces. Starting with the sewn together end of the pillowcase (Is there correct pillowcase terminology?) on the let and measure 17 or 18." That will be the bag itself. Now go to the other end and cut an inch and a half farther into the pillowcase than the stitching lines that form the hemmed  edge. That will become a strap.  Cut both pillowcases the same way. (That middle piece can go in your scrap bags.) 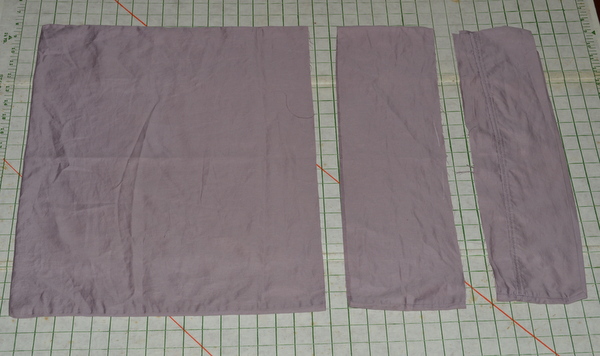 Different pillowcases have different structures. If there's a seam down one side, cut that open so that you won't have one in the middle of your strap. If there are seams down both sides, cut one open and don't worry about the other. That 1 1/2" from the seam you measured -- fold the raw edge in over the strip and then fold everything else in half lengthwise so that the raw edge is encased by the rest. You're making a strap that has at least four layers of fabric. Press the whole thing, pin if you like pins, and then sew a layer of top stitching 1/4" from each long edge. Make on strap from each pillowcase. 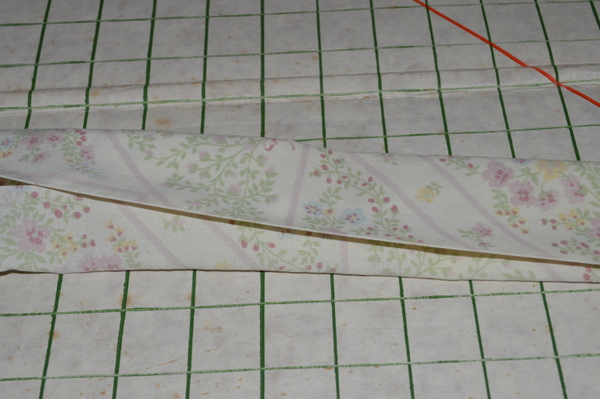 Now take the two bag portions and box the corners of each. Your pillowcase may or may not have seams down both sides. If there aren't seams to use as a guideline, use the existing fold.  Turn the bottom portion of your pillowcase inside out and line up the bottom seam with the side seam to form a triangle. Measure up three inches from the point and mark a line from one edge to the other. Stitch along the line. 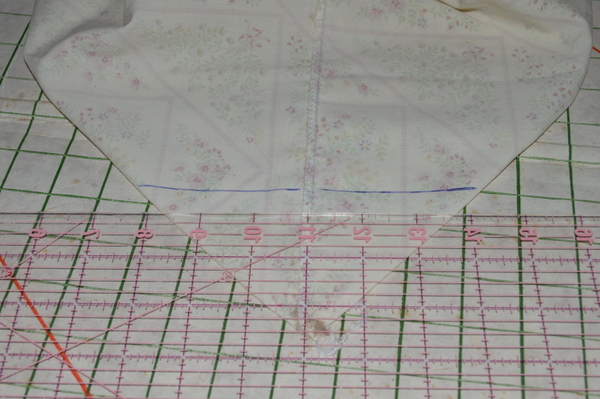 Boxing the corners will give the bag more structure and help it stand up once it's full of library books, but you can skip this step if you'd like. I trimmed away the extra triangles, but that's another step you can get away with skipping. 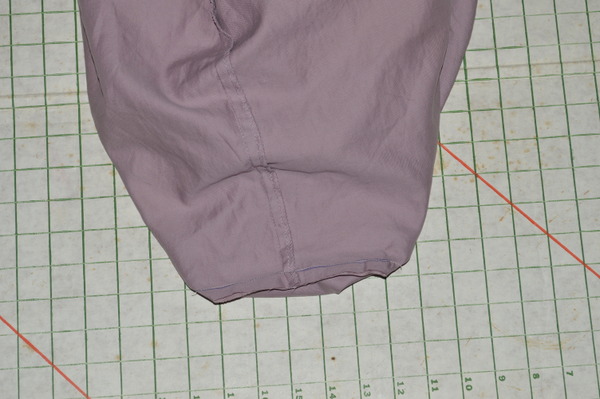 Nest one bag section inside of the other, with their right sides together. You'll have visible seams on the outside of the outer section and the inside of the inner section. Match up the side seams (or folds) and pin around the raw edge. Sew around the whole bag, leaving an open space wide enough to turn it right side out. Four inches or so should be plenty 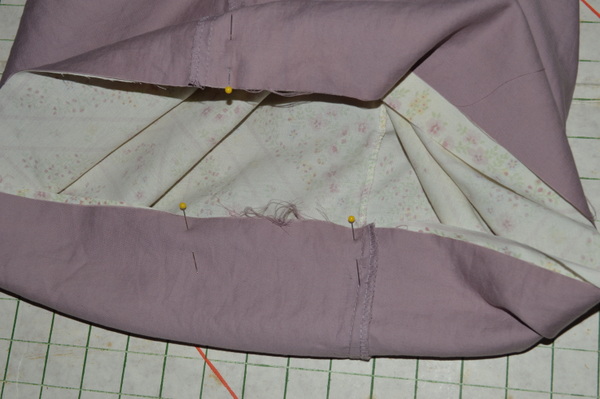 Turn the bag right side out and top stitch around the top edge, using the top stitching to close up the space you left for turning. (If I was making a bag from scratch, I'd hide that opening in a side seam of the lining, but the goal here was to use as many existing seams as possible.

Turn under the raw edges at the short end of each strap and securely sew them to the outside of the bag. (You could hide the ends in that top seam and make the bag truly reversible, but I've lost a lot of bags to torn straps over the years and want the extra layers of stitching as well as an easy way to resew them if they do come loose. After four years of carrying around my Nancy Drew Tote, which has straps attached the same way, they're showing no signs of failing.) 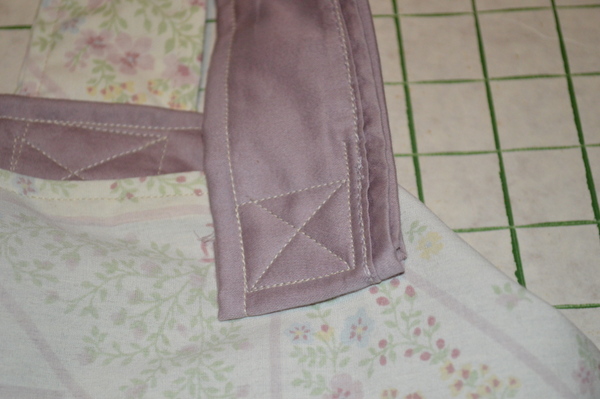 Around here we have been making bags out of recycled bird seed, chicken feed, even cat food bags if they are the ones with the webbing embedded between the plastic like layers. Hard to explain but maybe you understand. The method is similar, use the top part for straps, box the bottom. Some of my friends have even been creative in using the pretty bird picture so it is centered in the bag from top to bottom. Very sturdy!