Before I got sick, I found a couple of small scrap bags at the thrift store. The one that looks full of fabric scraps is still unopened, because I've got a plan for that. The other had a pretty star block wrapped around the rest of the contents and for $1.11 ($1.49 at 25% off) I figured that block alone was worth the price.

There were no regular fabric scraps in the bag at all. Folded up inside the pretty star block was all of this... 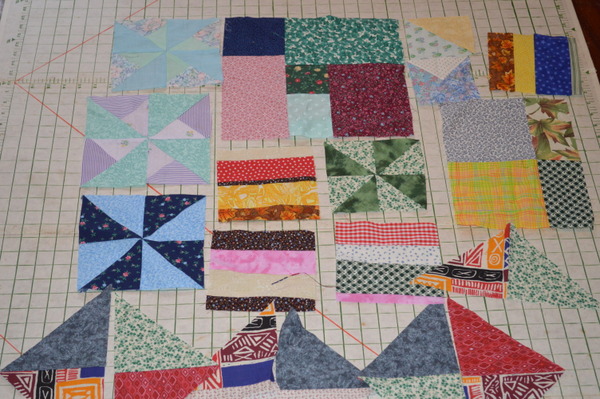 I have no idea what's going on there. It has to be leftover bits from several different projects, but (except for the pinwheels) I don't know what I'd do with any of it Those big blocks could be cut up for the fabric. Maybe I could use the half square triangles for the corners of scrappy string blocks? I'll figure it out later.

The star block was even better than it looked through the bag because there are eight of them! 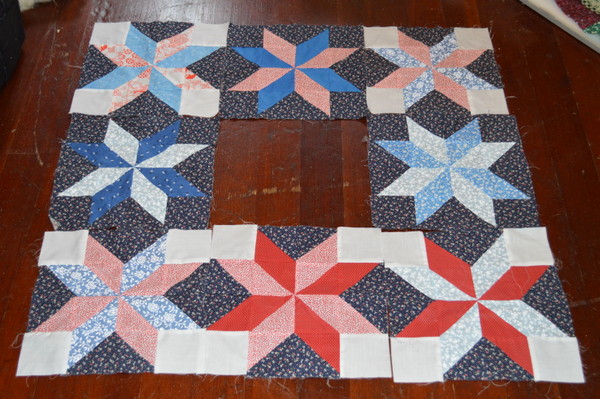 Not nine. Nine would make things too easy. Before I got healthy enough to take the pictures I thought I'd counted four with dark corners and four with white corners, which I could imagine a couple of different layouts for.

But no, there are five with white corners. If there were five with dark corners, I could have swapped out some white fabric and gone with the original plan. But there aren't. Now I'm thinking that I could find something in my stash that's similar to the dark blue floral and do that instead of the white....but I won't sew these together or make any commitments until I figure out what to do about my free motion quilting woes.

It's not the worst dollar I've ever spent, but it's definitely not what I was expecting to find.
Posted by Michelle at 4:00 AM

You bought someone else's Parts Department! Those stars are begging to get into something soon.

Those star blocks were definitely worth the $1 price. I am sure you will be able to do something with the rest of the scraps also.

What a great find! I'm sorry that you've been under the weather. I hope you recover soon.

It still looks like a great find to me! Might be time to make a scrap vortex placemat or two. =)