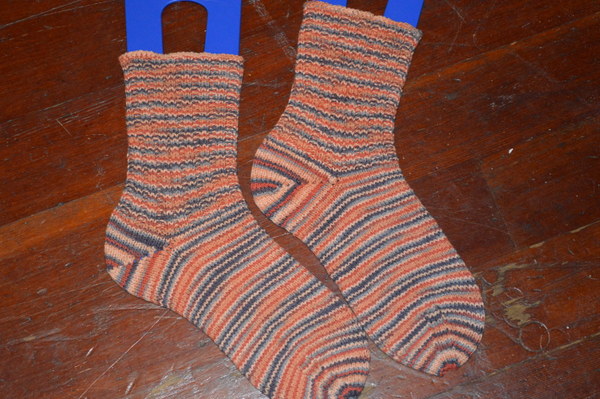 There's not much to say about these socks and this yarn that I didn't say about the Indigo Gold Socks. It's the same project in a different color. It kept my fingers busy, they'll be cozy to wear, and they've got colors that remind me of our favorite vacation destination. They also gave me something easier to work on than those twisted stitches.

Since Jo blogged about Still Missing, I've read every last one of Chevy Stevens's books. The latest, Never Let You Go, is just as good as the rest.  Lindsey Nash's abusive ex-husband has been released from jail and she knows that, despite the restraining orders, he's been in her house, watching her and going through her things. What I love so much about this author's books is that things are never as straight forward as they seem and I can't stop turning pages until I figure out what's really going on.

Trust Me by Gemma Metcalfe  is a fast paced thriller.  Lana's job is on the line if she doesn't sell a vacation package within the next couple of hours. She's been warned not to accept any excuses, not to believe what the prospects on the other end of the phone line tell her...then her next outgoing call is answered by a man who is about to end his own life. As he tells her what led to his decision, she begins to reveal her own secrets. The story is told in alternating first person chapters, both building up to the moment of the call. The characters  seemed more desperate than sympathetic, and there were a couple of twists that I couldn't suspend my disbelief enough to accept, but their lives were interesting enough to keep me reading.

Pressed to Death, the second book in the Perfectly Proper Paranormal Museum series  by Kirsten Weiss, is fun and slightly spooky. Museum owner Maddie Kosloski is stretched thin. The centerpiece of her harvest festival, a haunted wine press, has been reported stolen by its previous owner, even though Maddie  has a signed receipt. The Ladies Aid Society has bullied her into setting up a room at the annual haunted house. Her mother wants her to investigate a murder. Maddie is clever and resourceful and a lot of fun to read about. I also enjoyed the way the book includes both a historic mystery (the deaths connected to the wine press) and the present day one.

Disclosure -- I was provided with  advance review copies by the publishers. All opinions are my own. This post is linked to Patchwork Times, Yarn Along, Crazy Mom Quilts , Wrap up Friday
Posted by Michelle at 4:00 AM

Very nice pair of socks. The colors remind me of Sedona, Ariz. Where is your favorite vacation destination they remind you of?

Lovely socks! I am working on my first pair on 2 circs, and I am thinking that is going to be the way to go from now on!

lovely socks. I like the idea of making something as a memory of vacations.