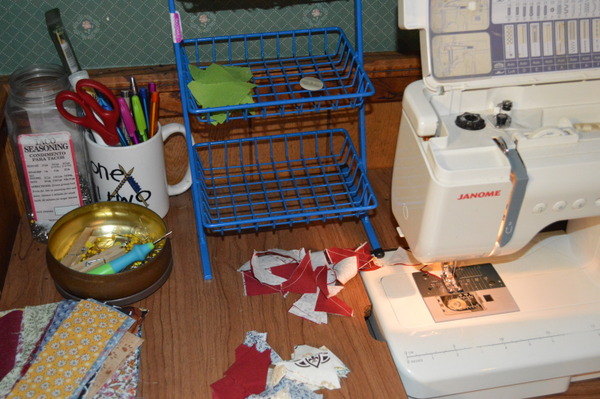 I've kept the table around my sewing machine cleared off and done my thirty minutes of sewing all but two days so far this month. .

The first day I missed was my husband's day off. No guilt about that one at all.

The second...well, that was my fault. I'd planned on getting my thirty minutes in before the kids and I left the house for the first Swim N Gym session, but I got myself distracted worrying about road conditions and the fact that I was about to meet a bunch of new people in my bathing suit. It's policy that kids who haven't passed the deep water swim test have to have a parent in the pool with them until they do, so I got to stand around holding my breath that they'd get their magic blue wrist bands. Both passed (apparently the criteria is more along the lines of "don't drown" than actually doing the strokes perfectly), so I get to keep my clothes on for the next nine weeks.  And their technique is already improving, which is why we're at the pool in the first place.  I should have had time to sew when we got home, but there was another complication at the pharmacy. I've spent more three hours there in the past two weeks, waiting for prescriptions that should have been filled and waiting. (It's the insurance company and doctor's office at fault, so changing pharmacies wouldn't fix the problem.) By the time we finally got home, I had just enough minutes left in my afternoon to get dinner thrown together.

Twelve days out of fourteen, though? That's more sewing than I've done in ages. I don't have any fabric usage to report (that thimble project bag didn't use enough to count), but I'm making progress on bigger things.

Did you see that the Row By Row theme for 2017 has been announced? It's Row By Row on the Go. There's a quilt layout on their site that I really like, using six vertical and six horizontal rows. I thnk that may be the motivation I need to pull out all of the patterns we collected last summer and make some decisions.  There's also a pillow sham using one row. I'm thinking either the quilt or the sham would be perfect for the bed in the trailer. Have the rest of your been making more progress than I am?

I think 12 out of 14 days is awesome!!! I love the little blue stacked basket thingie on your sewing table. You wouldn't happen to remember where you got that would you?

Your adventures in the pool made me laugh. It was just what I needed to brighten up my day. I think your time each day sewing is great. Keep it up.

Wow, 12 out of 14 is great with your busy life. And 30 minutes is awesome. I aim for 15 - grin. Your pool story was priceless. Thanks for the smile generator.