The Most Challenging Part of the Project...

Look! There are almost twice as many blocks as there were the last time I showed you my progress... 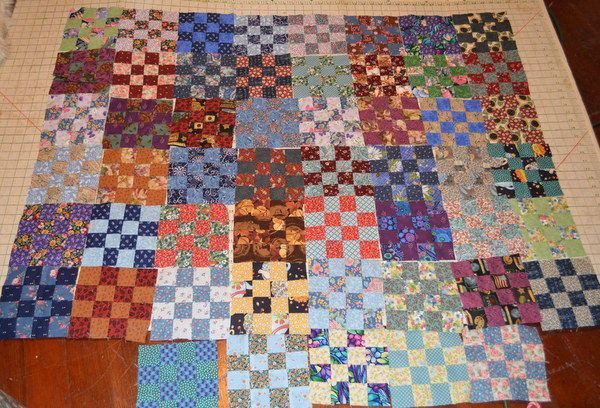 Originally, my plan was to make this a 60" square lap quilt, but I'm having fun and I definitely have the scraps to make it bigger and having a queen or larger quilt for our bed would be a good thing.

I can quilt it on the long arm, so that's not a major obstacle. But even in the temporarily empty bedroom, I'm not going to have space to lay it out once it gets much bigger. I can rearrange the few pieces of furniture, but that'll only gain a little space and sooner or later Teenage Son is going to get around to moving his stuff.

Would it be a bad idea to piece the smaller blocks into nine-patches to make it easier to deal with? Or will take make me unhappy with the way the colors ultimately land?
Posted by Michelle at 4:00 AM

These look great! That's a tough question, laying out so many. It is so scrappy that additions won't make a lot of difference unless you used the same colorway repeated. I have no design wall either and it is a struggle to re-lay out all the blocks again and again!

This is such a fun quilt. I love the fabric/color combinations in the blocks. I lay my blocks out on the floor, too, but luckily I don't have to keep picking them up because we don't use that floor very often. I don't usually lay them out until I have all the blocks made unless I just want to get an idea what they might look like together. For me, it would be hard to arrange and then have to pick up and arrange again. Will you be satisfied if you don't get the same arrangement, or if all the lights are together in a corner, or three of the same/similar colors/fabrics are in a row? It's a tough question.

Two ideas, first you can fold the blocks in half, that way you can lay them out in a smaller area. Since your blocks have the same two colors, it wouldn't be hard to make sure that similarly shaded ones aren't touching. Or you could make the four patches, not sew them together yet, take a picture and then work with the photos. Turning them and switching the order in an album. I'm sure it will be a great mismash of pretty colors when you're done.

I set my blocks into two stacks (quilt halves). I separate alike blocks or colors into the stacks. This will help distribute the blocks across the quilt. Then I take one stack and layout half the quilt top and piece. Then I just fold that piece so I see part of the quilt and layout the blocks in the second stack. It works great! Thanks for sharing your lovely blocks with Oh Scrap!