{Yarn Along} The Strange Birth, Short Life, and Sudden Death of Justice Girl

Remember that knit star I was working on last week? I've been knitting more of them  in the evenings while we watch TV and now I've got a whole pile. 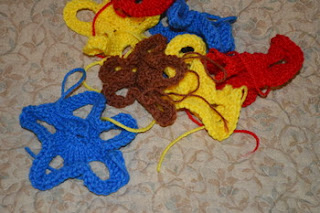 I'm fascinated by old radio shows and the early years of television, so when I saw The Strange Birth, Short Life, and Sudden Death of Justice Girl

by Julian David Stone, I knew I was going to want to read it.  I wasn't disappointed.

On the verge of being fired from Hermie's Henhouse for refusing to sign a loyalty oath, Jonny Dirby makes some last minute changes to that night's script, transforming a costumed sidekick with no lines into Justice Girl. His creation  is a runaway success and the next morning, Jonny finds himself rehired by the network with complete control over the new Justice Girl television series. He seizes the opportunity to funnel work to fellow writers who have been blacklisted by the industry. Felicity Kensington, the young woman who find herself thrust from a minor role in a comedy sketch into the starring role in her own series, isn't an actress at all. She's working under an assumed name, secretly trying to find proof of the blacklisted writers and provide their names to her father to use in his political campaign. I enjoyed the book and found myself emphasizing with both Jonny and Felicity, who could have easily come across as a  poor little rich girl.

Disclosure -- The publisher provided me with an electronic ARC.
Posted by Michelle at 4:00 AM