{Yarn Along} The Doris Diaries

I'm knitting a star for the Christmas tree, following a free pattern I found over on Ravelry. It's knitting up quickly and I like the way that it's all one length of yarn with none of the cutting and rejoining yarn that I expected when I first saw the pattern. 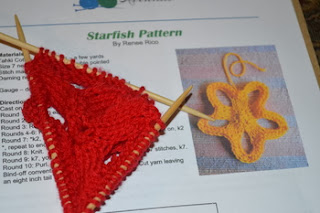 As soon as I heard about The Doris Diaries, I added the first book, I've Got Some Lovin' To Do: The Diaries Of A Roaring Twenties Teen, 1925-1926

, to my Amazon cart along with my Christmas shopping. It came along with the rest of the presents and I tucked it away in a safe place, then forgot about it completely until I got the chance to review the second book, Reaching for the Moon: More Diaries of a Roaring Twenties Teen (1927-1929)

for the blog. Even though I try not to pay full price for books that I don't intend to read right away, sometimes good intentions aren't enough. (And sometimes I just pay $1.99 for the Kindle edition instead of ransacking the entire house to find a book I put away a year ago. I figured that my time and sanity were worth it and that I'd find the paperback as soon as I spent more money to read it. It didn't happen.)

I read the second book first, while I still thought I knew where my copy of the first one was tucked away. It's probably my less favorite of the two because the entries are shorter.  This isn't a polished memoir. The entries were written day by day and reflect whatever was going on in Doris's life at the time.  She buys a lot of clothes and goes on a lot of dates and falls in love with just about every set of male eyes she looks into.

Doris kissed just as many guys in the first book, but she's also going for canoe rides and horseback riding...and having no end of trouble with the family Ford, making me wonder if minor fender benders were more common back then. The entries in this book are longer and more detailed. I loved her description of a late night ride to visit and abandoned house that they'd been told was haunted.

It amazed me how much freedom and lack of supervision a teenage girl in the 1920s had. Now I'm wondering if it was typical of the time, or how much her parents knew about what their daughter was actually up to.

Both books contain detailed footnotes, appendixes, and glossaries of Doris's slang terms. I did find myself wondering if it was "right" to publish her diaries after her death. In an early entry in the second book, she comments that she would "hate to have the public know all my thoughts." But I don't think that will stop me from reading the next book in the series when it's released.

Disclosure -- I was provided with an electronic review copy of Reaching for the Moon by the publisher and bought my own copies (two of 'em!) of I've Got Some Lovin' To Do

The star looks great. I am surprised that you don't have to reattach the yarn or icord and seam

that looks like a really nice pattern, thanks for linking it :)

I had to print the pattern out right away and will try it later today. Thanks