{Yarn Along} The Funeral Dress

I haven't done any knitting this week. The Opal socks need the heel turned. The Croc socks require just barely too much counting to work on when I'm with my family. And I just can't work up much enthusiasm for this pair: 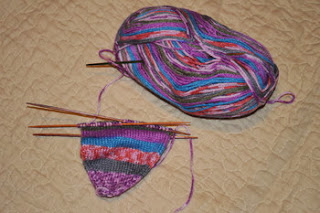 The colors are pretty enough, but those stripes seem too clunky to me. One of the risks you run when you buy sale yarn on impulse, just guessing at what it will do, I guess. But now that I own it, I'm stuck. I can't think of anything I'd rather have these stripes on than socks. So this project is living in my purse, waiting for that moment when I'm completely stuck somewhere and I don't have anything more fun to work on.

by Susan Gregg Gilmore. Set in the early 1970s, it's the story of Emmalee Bullard, a young woman with a newborn baby and a troubled life. She lives alone in a mountain shack with her father, struggling to care for her baby in almost impossible circumstances.

When Leona, one of the older seamstresses at the factory where she works offers to take Emmalee and her baby in, she begins to hope for a better future. Then Leona and her husband's truck is run off the road as they drive down the mountain to a church supper. You know those scenes where you just want to scream at the author for doing something so awful to her characters? But if things didn't go wrong, I suppose there wouldn't be much of a story. And there's a lot of story here. The details as Emmalee sews a burial dress for Leona, trying to ignore the throbbing beginnings of mastitis were so vivid that I ached for her. I just wanted to wrap my arms around her and make everything all better.

I've also been reading The Sleeper

by Gillian White. There's a lot going on in this book, which opens with Clover, a farmer's wife dreading the Christmas visit of her mother-in-law. Flashbacks tell the story of the mother-in-law's troubled childhood. Then Clover's husband discovers a corpse in the flooded cellar. Every character has problems and secrets and I found myself slogging through, trying to figure it all out and trying to figure out if I actually cared enough to finish or not. There is a payoff at the end that ties most of it together, but I'm not sure if it's worth the trouble getting there.

Disclosure -- I was provided with copies of both books by the publishers.
Posted by Michelle at 4:00 AM

The colors in the yarn are beautiful. I'm with you on reading some of those books (or watching a show) that it takes until the end to figure it out.

I like those socks Michelle! Keep at them and you will too! I keep thinking of you. I have joined the Bookbub site and get a daily email about free and inexpensive books. Wondered if you are on that list?

There's a pattern called Charlies's Hat that uses sock yarn; maybe you'd get better stripes on something like that? I'm impressed that you are doing toe up!

I like a chunky stripe on socks! These look great to me!