I've been playing with the new Bowties die that AccuQuilt sent me.  These aren't the traditional bow ties that the die was intended to make, but I've got an idea... 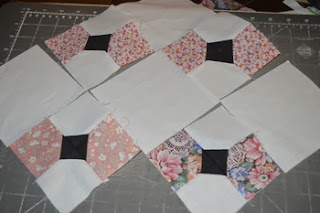 When I started cutting scraps for my Cheddar Bow Ties, I was desperately wishing I had a die to do it with. Squaring up the edges and then trying to be sure I could get all four squares that I needed before I started cutting took time -- a lot more time than just layering the fabric over the blades! Too bad this die doesn't make 3" blocks. With the quilt top 2/3 done, I'll finish that one the old fashioned way. And the 2" blocks for the Temecula Quilting version.

The AccuQuilt die makes 4" Bowtie blocks from 2 1/2" and 1 1/2" squares. To get the most out of my pinks scraps and the black fabric (which I'm supposed to be using for Hocuspocusville and keep stealing for other projects), I'm starting with strips just under 3" wide. Cutting the print pieces is about as straightforward as it could be. 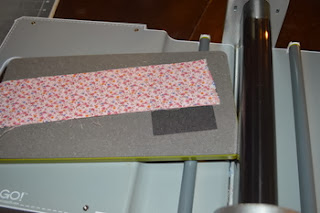 To cut the smaller squares, I had to get a little more creative. If I let the end of the fabric run off the die in the other direction, I was afraid I'd cut it on the blades for the larger squares. So I position it just over the blades that I'm cutting with. 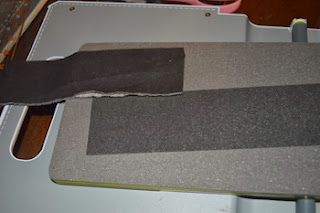 And, to avoid extra wear and tear on my mat, I place the mat just over the portion of the die that I'm using. (I do this any time I'm only using a portion of a die.) 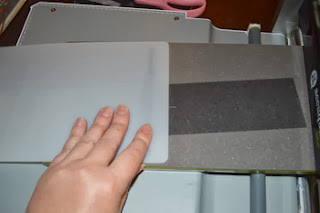 If I was cutting these pieces from yardage, I think I'd use my 1 1/2" and  2 1/2" strip dies to cut the squares. But for small or oddly shaped scraps, this die is just what I'd hoped for.

I'm linking up to Design Wall Monday at Patchwork Times.
Posted by Michelle at 4:00 AM

Love the pink and black butterflies, if you are asking me! ;)

Bowties as Butterflies looking cute! Glad you showed a way to save wear and tear on the mat.