{yarn along} in search of mindless knitting

I might need to give my projects just a little more thought.  As much as I still love the Rose Ribbons Shawl, it has charts. And that flower lace pattern requires concentration that I can't manage unless I'm alone in the room. So I decided to start something easier. 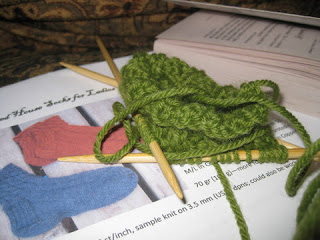 My Ravelry queue didn't have anything that fit the bill. I'm still trying to figure out how that's possible, but nothing in that list of 893 projects was what I wanted to cast on this week.... There was a project I've had in my shopping cart forever that I thought would tie in perfectly with the whole blog hop, but I took another look at it and it didn't appeal to me anymore, either.

More searching and browsing and I decided on a pair of Entwined House Socks. They're worsted weight, they've got cables, and I can use a skein of that Wool-ease I bought a couple of weeks back. Perfect, right? 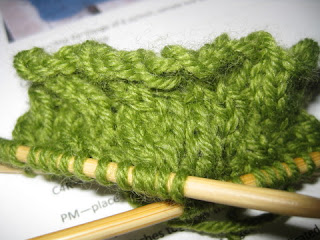 Cables are fiddlier than they used to be. I can do them, but not when little boys are jumping over me, screaming to be rescued from whatever sibling is in hot pursuit.

Any suggestions for a really, really easy project that I'll actually want to knit? I've got plenty of boring, unappealing ones already.

While I've been waiting for that elusive stretch of peace and quiet, I've been reading. Wave Good-Bye is the fourth book in the Southern Beauty Shop mystery series, by Joanna Campbell Slann writing as Lila Dare. She did it to me again. But this time there's not another book in the series to run out and buy. I'm going to have to wait.  Luckily the second book in her Jane Eyre series come out next month and the next Kiki Lowenstein book comes out in May. (And I just saw on her blog that she's working on another new series -- woohoo!)

I'd already read the first three books in this series, and I thoroughly enjoyed them all. This time, Violetta's salon in in jeopardy. Lisa Butterworth, the social media consultant that Grace Ann hired in an attempt to boost business has stolen their client list and passed it along to Snippets, a rival salon that just opened a new branch nearby. When Lisa is found dead in the salon, Grace Ann is a suspect.  She's also out of a job, along with her mother and their friends, partly due to Lisa's treachery.

I love that there was so much going on in this book besides the murder. It's not until 3/4 of the way through that we even find out exactly how Lisa died. And who did it kept me guessing until almost the very end. At that point, I had an idea, but I still wasn't quite sure.

I highly recommend this one if you like cozy romances with some romance thrown in.

Another book I highly recommend, but only if you read horror novels, is  Heart-Shaped Box by Joe Hill. When I read it a few months back, I kept feeling like I was reading a Stephen King novel. It wasn't until later that I figured out Joe Hill is his son.

I'd borrowed it from the library, but I've been wanting a copy for myself. This is definitely one I'm going to reread when I'm in the mood for something creepy. I saw yesterday that the Kindle edition had been marked down $1.99 -- cheaper than I could get a used paperback, if I could find one. (Do watch the price if you decide to order it, since the prices on Kindle books can fluctuate wildly from day to day.)

Here's the description from the book's Amazon page:

Judas Coyne is a collector of the macabre: a cookbook for cannibals . . . a used hangman's noose . . . a snuff film. An aging death-metal rock god, his taste for the unnatural is as widely known to his legions of fans as the notorious excesses of his youth. But nothing he possesses is as unlikely or as dreadful as his latest discovery, an item for sale on the Internet, a thing so terribly strange, Jude can't help but reach for his wallet.

I will "sell" my stepfather's ghost to the highest bidder. . . .


For a thousand dollars, Jude will become the proud owner of a dead man's suit, said to be haunted by a restless spirit. He isn't afraid. He has spent a lifetime coping with ghosts—of an abusive father, of the lovers he callously abandoned, of the bandmates he betrayed. What's one more?

But what UPS delivers to his door in a black heart-shaped box is no imaginary or metaphorical ghost, no benign conversation piece. It's the real thing.

One of the many things I love about my Kindle is the ability to read late at night with no lights on -- but I've managed to really scare myself a couple of times, once in the middle of the afternoon on a dark and cloudy day!

For more fun knitting projects to drool over, check out On the Needles at Patchwork Times and Work in Progress Wednesdays at Tami's Amis.  And don't forget the Nancy Drew Blog hop!

How about a simple scarf? That's about as basic as it gets and even I can do that! You could use scraps and just change colors when you feel like it if you want something other than solid...? Wish I had time for a good book. We'll be taking a trip soon so I will shop for some for my kindle to keep me busy. I always take quilting along too, but can't do it well enough in the car, so books win! Take care.

Wow... I just finished the same book on CD. Joe definitity is following His fathers footsteps.

How about knitting some simple squares that can be stitched together at a later date when things quiet down a tad? It could be interesting with all kinds different color squares.

Thanks for sharing with us.
Sincerely,
Tricia

My semi-mindless projects are: simple hats or cowls, toddler socks for donation. I also do two socks on two circs.

I really enjoyed "Heart Shaped Box," too. He's written something else, too - a short story collection, maybe? I've forgotten. Looking at his picture, you can see a younger Stephen King.