I expected to have this baby quilt done last month. There's nothing complicated about it. There aren't that many pieces, not by my standards....and three weeks later I've still got four more blocks to go.

How can it take so dang long to assemble squares into four patches and then those into nine patches? 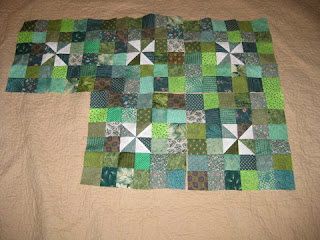 I swear, I'm going to make a second one to prove to myself that this doesn't take as long as I think it does! To see more design walls, head over to Patchwork Times.
Posted by Michelle at 9:59 AM

Love your greens! What a great baby quilt. Especially for a March baby!