This week, Judy challenged us to make something with cinnamon. In this house, that'd be hard not to do. The jar of cinnamon lives on the counter beside the stove because I'm always using it in oatmeal and French toast. 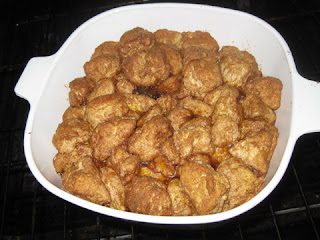 Next week is orange juice -- I need to start looking for recipes because I've never done anything with orange juice except drink it.

This looks delish... I'm going to give it a try this weekend!

I'm heard of this for years and for years and said I would make it and I never have. I really need to buy some tube biscuits. It would be such a good treat for the grandkids.

I love making this too...its easy and delicious!!Have a great day!!

I have not made monkey bread in such a long time..So good to.

I had no idea Monkey Bread was so simple to make! Thanks for the great info -- my kids will be grinning this weekend! --Darcy at sothenstories.com