I like having Judy tell me what to cook! It's really helping me to break out of the "spaghetti or tacos or meatloaf" rut I've fallen into.
This week's challenge ingredient was peanut butter.  So of course my first though was "peanut butter cookies!"  But that wouldn't have filled in one of my dinner slots for the week. My next idea was that peanut crusted chicken that the boys like so much at the Chinese buffet -- except I don't know what it's called.
I Googled and searched and finally decided on this recipe for Thai Peanut Chicken, which I found on allrecipes.com. 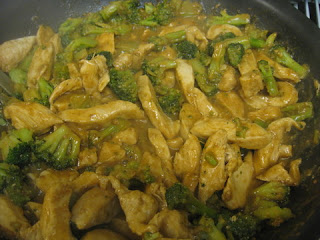 Two hours before I needed to start cooking dinner the real challenge hit, in the form of a migraine that left my tongue and both arms numb. Thank God for teenage daughters, especially teenage daughters who are really good at charades and can understand what Mom is saying when she's tripping over her own words!  She did all of the measuring and cooking for me while I waited for my werewolf pills (known as Caffergot to people without monster obsessed kids) to kick in.
We made a couple of substitutions because I was in no condition to dig out the white wine vinegar myself or explain what cupboard it should be in. According to hubby, Shaoxing wine (which he uses in his Chinese cooking) is completely different stuff. But it tasted good. And we'll definitely be making this again.

I really need to get past my mental block of scooping peanut butter into savory dishes. It looks amazing and sounds amazing but every time I go to scoop I can't quite do it.

Note to self, try this recipe or one like it. It looks amazing.

Thanks for playing with Judy and posting. I haven't played yet but after reading this post maybe I will. I'm so stuck in a rut when it comes to meals. I'm going to give this recipe a try. It looks so good.