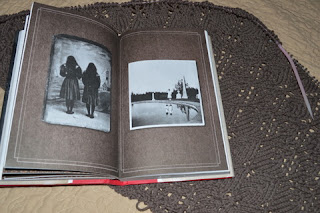 The book is Miss Peregrine's Home for Peculiar Children

. I can't remember exactly how I wound up reading this one -- if I saw it at the library, or Teenage Daughter recommended it, or if I saw it somewhere online. However I got my hands on it, I spent last week toting this book around with me, hoping for snatches of time to read just a few more pages. I loved the writing, and the vintage photographs -- which are real. The girl in the giant glass jar and the girl standing alone by a cemetery pool with a second girl reflected in the water beside her were wonderfully creepy. But not the boy with the bees. (I liked the character in the book, but the picture didn't impress me. He's got a queen on him somewhere, and the bees are swarming, and it's no big deal....do I spend too much time worrying about bees?)

The plot is dark and intriguing. Jacob grew up hearing his grandfather's stories about childhood on a mysterious island with Miss Peregrine and the children she sheltered, keeping them hidden from the monsters who would destroy them because they were peculiar. As Jacob grew older and learned about the horrors of the second world war, he thought he had finally figured out the truth -- it was all a fairytale his grandfather had dreamed up and the the old photographs his grandfather had used as evidence of his stories were poorly executed fakes. Then his grandfather was killed -- by a pack of dogs, according to the authorities -- and he learned that the stories were true.... 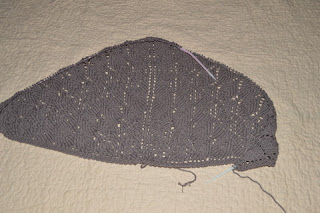 The Ribbons and Roses shawl is still slowly growing. I had to knit half of the stitches onto a second needle to spead it all out for a picture. There should only be about twenty rows lef to knit, but I just finished my first skein of yarn and I'm sure I've got enough in the other two skeins for a few extra repeats.  I don't usually make things bigger, but I want this shawl as big as I can make it with the yarn I've got. 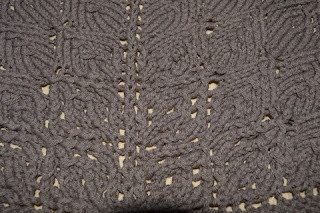 Beautiful knitting!! I wish I could knit as well as you great job!!

We have this book in the library, but I haven't read it. Just the title got me to order it, thinking it might be weird enough that the teenagers might like it.

The stitch pattern in your shawl looks gorgeous!

This pattern I love very much. It's so pretty.

This was a great book wish I could knit though I'D like to make a shawl like yours. Thanks for sharing and bringing this book to the light it was great like I said very intresting.