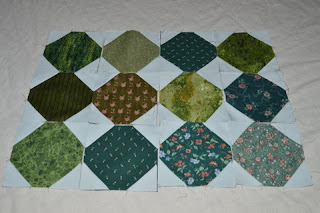 When I cut the borders for the turtle quilt, my focus was on whether or not I had enough light blue sheet for the inner border and for the 240 squares that I needed for the snowball blocks. I decided to go with the narrowest strips I thought would work -- 2" wide.

I wasn't thinking about how I was going to mange the corners....not until I was lying awake at 2am and realized that if I'd cut those stupid inner borders 2 1/2" wide I could have snowball blocks around the entire outer edge and not worry about putting plain blue blocks in the corners.

It's the same exact math I used for the borders of Madder Snowballs -- so why couldn't I remember it until after I'd cut the strips?

The turtles distracted me. They finish at 14" and I was trying to figure out how to make snowballs that would go evenly into that....and the whole thing was starting to sound like that math problem where the two trains leave different cities at different times and meet at some point you're supposed to determine. I never did learn how to do that problem.....

And I didn't need to do all of those mental contortions. There are four turtles in each row.  If I make 4" snowballs, fourteen of them will fit alongside the four 14" turtles. Easy-peasy -- as long as you remember how to make the borders fit!

Luckily, there was enough sheet to recut the inner borders and it all should go together now.
Posted by Michelle at 4:00 AM