a border for the turtles

Back in October, I was playing around with my AccuQuilt Go! cutter and figured out how to use the large Drunkard's Path die and the Dresden Plate die to make pieced turtles. They went together lickety split and within a couple of days, I had enough to make a lap quilt.

Everyone thought it needed a border. Even me. That's how I found out what everyone else thought -- I had a feeling I'd be making a mistake if I didn't, and I asked my readers what they thought. I was going to have to make a border and it was going to have to be a pieced border because I don't like plain ones. 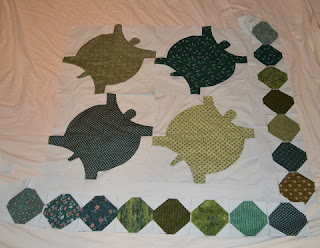 One of my readers suggested scrappy green snowball blocks that would look like rocks. It was the perfect solution. I could see it in my head. But I didn't know if I had enough background fabric left for the borders and corners.  (That's one of the pitfalls of working with old sheets -- matching the pale pale blue I used for the background of my turtles would be next to impossible.) And I didn't want to dig all of my green scraps back out.  Not to mention adding 300 pieces to a quilt that only had 160 pieces to start with.
So I did what I usually do when I'm worried about running out of fabric and not working on something for someone else. I put the whole project in time out while I worked up my courage.
Turns out there was enough pale blue sheet left to do what I wanted, and enough green to make the snowball blocks. I did buy a few fat quarters, but that was just to ensure that I have enough for the green baby quilt that I've got planned next.
To see more design walls, head over to Patchwork Times.

Great idea and I'm glad it worked out.

very nice turtles! I'm glad you had enough fabric to do what you wanted for the border

Yup -- it looks like stepping stones -- the perfect border! :)