wfmw - It has a wrecking ball! 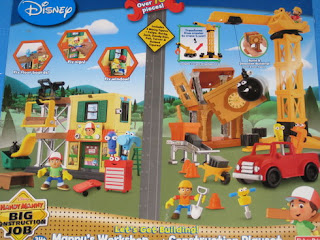 Last Christmas (not the one a month ago -- the one before that), my youngest son got a Disney Handy Manny Manny's Workshop and Construction Playset

. I took one look at the box -- Over 70 Pieces! -- and decided to tuck it away for a while so those 70 pieces didn't get mixed in with the pieces of every other Christmas present the boys had received. And I might have sort of accidentally-on-purpose forgotten about it for the next twelve months.

Did I mention that it has over 70 pieces? And that my boys have lost just about all of the pieces of everything they have ever owned -- usually within the first hour of owning it? Unless it's a coconut.

I might have been wrong with this one. Or maybe they needed a year to grow into it. I think that's the story I'll stick to. But for the past couple of weeks, they have been putting most of those pieces carefully back into the box they came in. They've been working together, using the pictures on the front of the box as a guide for assembling a clock tower with cinder blocks and a garbage chute. And using the wrecking ball to knock it down so they could build it again. 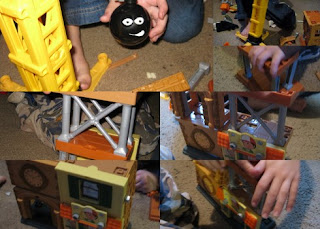 As far as I know, they haven't even watched Handy Manny once. It's definitely not the television show that's the appeal here. And it's not the first building toy they've had. I think that smiling wrecking ball might be the secret to the success of this toy.

This post is linked to Works for me Wednesday at We are THAT family.
Posted by Michelle at 4:28 AM

Lucy | Charm About You said...

cute! Good call on keeping it hidden away!
My kids watch that show and I really like it, looks like a fun toy - what kid doesn't love a wrecking ball!!