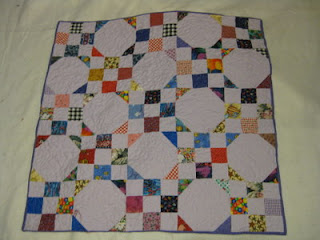 For a quilter who claims to dislike snowball blocks, I sure make a lot of them. In the past, I've always cut squares for the corners and sewed along the diagonal, then wound up with waste triangles that I lose before using them for anything else. I've seen lots of great things done with waste triangles, I've just never pulled it off myself. And sometimes I'm working with limited amounts of fabric and want as much as possible in the quilt I'm making, not in a box of waste triangles for some possible future project.

This time I wanted to use up a bunch of half square triangles left over from my two Extra Scrappy Pinwheels quilts.

As far as I know, there isn't a die available that cuts the shape you'd need for the center of the snowball blocks. And if there was, I'm not sure it would be on the top of my wish list, no matter how many of these blocks I make.

For these blocks, I used 6 1/2" squares of white muslin and triangles cut with the 2" finished half square triangle die (which would be equivalent to triangles cut from 2 7/8" squares)

Cut a 2 1/2" square of paper to match the squares you would have used for the corner triangles, then lay a fabric triangle onto it and cut off the excess paper. That's the same excess you'd trim as waste triangles if you were using squares for the corners. 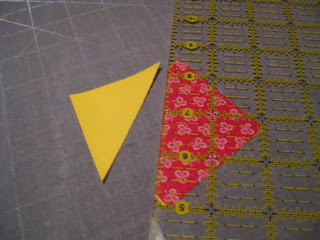 Using that extra little triangle that you cut off, mark the corners of the 6 1/2" background square and trim away the extra fabric. 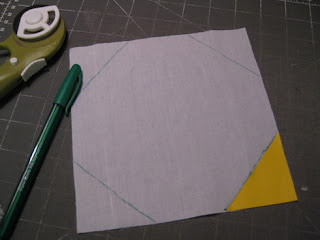 The diagonal edge of the half square triangles lines up along the edges that you just cut. 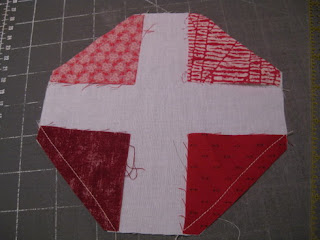 Stitch and press and you've got your snowball block. 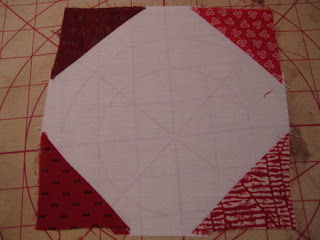 I'm not sure if this is faster than the "stitch and flip" method, but I suspect that it is. I stacked my background squares and trimmed several a time. And I didn't have to rip out and re-sew any seams that weren't quite down the center of the square. Which technique I use in the future is probably going to depend on what pieces I've already got cut.

This post is linked to Try it on Tuesday at Jo's Country Junction.
Posted by Michelle at 5:34 AM

I love the way the snowballs work among the nine-patches! I've got a lot of little-bits-of-shirts that'll be going into projects soon, so I love this idea: simple and beautiful.