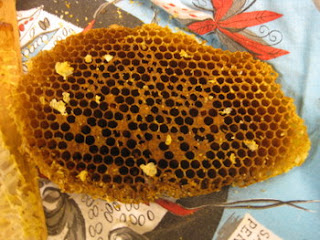 I wasn't going to let the beeswax from the new hive to go waste. After all of that trouble, we had to wind up with something! After the bees left, and the yellow jackets cleared out all of the brood and honey, my husband pulled all of the empty comb out of the hive.

And today, I decided to figure out how to melt it. I had already picked up a cheap sauce pan from the thrift store, so I went online and Googled "melting beeswax." The instructions I found assumed that I was melting nice wax from a commercial source.

My wax has a few dead bees in it, and yucky dark patches, and what might've been some capped brood the yellow jackets missed. So I set up my double boiler and hoped for the best. 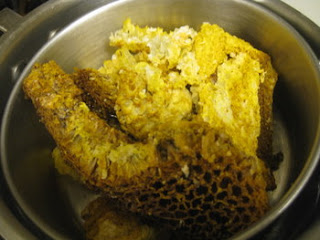 An hour or so later, I strained the nasty stuff that looked like it was never going to melt through some cheesecloth and wound up with this: 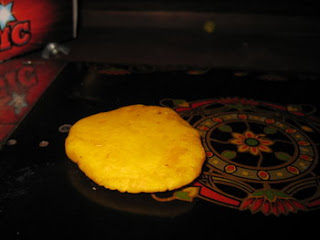 This post is linked to Farmgirl Friday
Posted by Michelle at 5:31 AM

How cool! I always loved candles and playing around with wax. If only our house had more room for all the supplies....

Yes, a little something for all your efforts is a wonderful reward! Have you been making candles long?
Deb