more drama in the hive 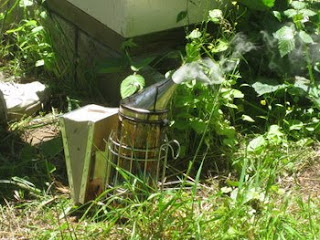 If the chickens are picking on another chicken, you can remove the injured one from the coop. If the cats or kids are fighting, you can separate them.

If the bees are fighting, you can just stand there helplessly and wish for a can of bug spray. Not because the bug spray would solve anything, but because you're so ticked off at those stupid bees that just spraying them all suddenly seems like the best option.

Husband relocated a hive from a co-worker's pump housing.

The new bees swarmed from their hive and attempted to invade our established hive.

Husband got the swarm back into their own box and moved them to the opposite end of our property.

Tuesday, my husband discovered that the new bees had swarmed from their box again. Yellow jackets had moved into that hive and cleared out the little honey that was there. And the swarm was on the move, headed back in the direction of our established hive.

We thought we were going to have to wrap the hive in wet sheets to keep out the invaders. So of course I took sheets from the linen closet. Those are the ones I know I can replace! I wasn't sacrificing a vintage sheet, or one of my white ones, for the bugs.

Turned out, we didn't need the sheet after all, so it'll get washed and go back inside. But my oldest son is still telling anyone who will listen that I took his sheets for the bees. I'm learning from the experience and going to track down a set that isn't bed or quilt worthy to keep around just in case.

We tried putting swarm lure in the new hive, mainly to steer the swarm away from the established hive. Only a small handful of bees turned up there. I don't know where the rest went.

Now we're just hoping that they didn't weaken the big hive too much. With winter coming, this was the last thing the bugs needed.

I've saved the beeswax from the abandoned hive. There's no much, but I figure I can melt it down into a little lump to use for hand stitching.

I'll be linking this post to the Farmgirl Friday Blog Hop
Posted by Michelle at 6:26 AM

UGH, I have the shivers now ha!

Wow, I didn't know bees fight! Hope everyone goes where they are supposed to!

I am too frightened to even get near a hive. I admire your spunk. Good luck with driving off the invaders!
Hugs,
Patti

Oh my goodness, Michelle. It must be so challenging to have bees. I like the honey but don't know if I'd like the bees. ha! Can't have one without the other.

Loved your visit to my blog and your comment, too. Thanks so much for stopping by and come any time. Susan from writingstraightfromtheheart.blogspot.

Hail to thee oh survivor of the great bee war! A bee in your hair? That would go from a regular bee to a bee flat. Nobody messes with my hair. Love your blog!