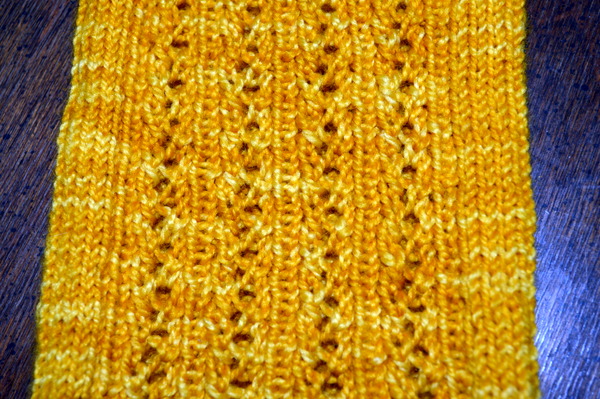 I must've gone through my entire Ralvelry queue trying to find the perfect pattern to use with this yarn...and in the end I'm making those same lace rib socks I've made twice so far this year. But instead of doing two purl stitches between the rows of lace, I'm doing a purl-knit-purl. It's just different enough to keep me entertained, and I love the way it looks.

The Marriage Pact by Michelle Richmond.

Alice and Jake don't intend to join The Pact, it just sort of happens. After he says that he loves weddings, Alice invites a new client to her own upcoming celebration. Soon after that, a wooden box containing a smaller locked box is delivered to their house.  Once they return from their honeymoon, a Pact member comes and explains the significance of the gift to Jake and Alice. It's an invitation to join an elite group dedicated to strengthening the marriages of their members. What could be wrong with that? Plenty.

I absolutely loved this fast-paced thriller. It is dumb of Jake and Alice to sign on the dotted line in the first place, especially since Alice is a lawyer and doesn't take the time to read the entire contract, but real people sign up for predatory time shares and multi-level marketing companies all the time, so I was able to understand how they slipped into the group's clutches. As far as fictional married couples go, these two seem to really care about each other. They're three-dimensional characters who actually communicate with each other. Alice's background as a lawyer and Jake's background as a marriage counselor give them plenty of insight into what's right and what's very, very wrong with the group they've fallen in with. The entire book is told from Jake's point of view, so there's no bouncing back and forth between multiple characters. We know what he knows, and what Alice tells him and, except for a brief teaser at the beginning, things happen in order.

Anything But Simple by Lucinda J Miller

I picked up this one because I was curious. I enjoy the glimpses that memoirs give me into lives different from my own and I always worry that I'm breaking some unknown rule when we're shopping at the local grocery stores owned by Mennonites. Maybe, I thought, this book would help me figure out some of those rules. I came away from reading it with the thought that maybe I've been worrying about nothing. The author's life was interesting to read about and not nearly as different from my own as I would have imagined. She's open about her thought and feelings, but I never felt like she was sharing too many intimate details.

The dead stay dead. Gera Stapleton is convinced of that fact and not at all pleased to be sent to report on a murder in the ghost filled town of Jerome, Arizona. Everyone but her seems convinced that Mac, the most well known of the local spooks, is the killer.  (They also blame him for problems with the local wifi.) There's a strong romantic element to the plot that reminds me of the Harlequins I used to read and I've never been so concerned about a heroine's driving ability. Tangible Spirits combines an intriguing murder mystery with some really fascinating local legends. I'm not sure I correctly separated the real ones from the author's creations, but I definitely enjoyed having a different view of Jerome than we get when walking through the gift shops on our annual trip down to Sedona.

Disclosure -- I was provided with advance review copies by the publishers. All opinions are my own. This post is linked to  iknead2knit, and  Frontier Dreams
Posted by Michelle at 4:00 AM

Isn't knitting great! We can change one small thing, and create a different look. Love that color.

That yarn is very pretty. I especially find the Mennonite book interesting.

Thanks for the book reviews. I love your socks and wish you would give the original pattern name. Thanks for a very interesting post. I love how you talked about your feelings at buying at the Mennonite store. My mother's mother had Pennsylvania Dutch roots. She was not strict about them in any way. I find the Amish and Mennonites interesting.