Using the Pretty Ones

I've been using the doily/dishrag. As I type this, it's tumbling around in the washer with a bunch of towels and socks. From my point of view, there's no reason not to use the pretty ones. 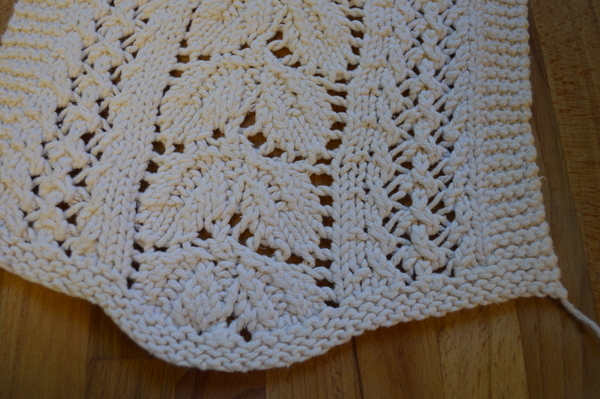 This was up in the sewing room. I'm guessing it's one of mine since the ends were never woven in, but I have no memory of knitting it. With all of the other lace I've knit over the years I don't think I need to preserve the dishcloths.

Anne and Marco Conti leave their six month old daughter sleeping peacefully in her crib while they have dinner with the neighbors. The two houses share a wall. They're only a few feet away -- and they have the baby monitor with them. Even with its video screen broken, they would hear if anything happened to their baby...

Except they didn't hear a sound when Cora was taken from her crib.  The Couple Next Door by Shari Lapena kept me guessing and wondering which little details were important clues, but I never did care much about the couple or what happened to them. And that shocking ending that the cover copy promises? I found it more puzzling than shocking.

I expected What Was Mine by Helen Klein Ross to be a thriller. There's that empty swing on the cover and I guess when I reserved the book through the online card catalog I only read the first few lines of the description -- baby stolen from a shopping cart...secret kept for decades... It wasn't at all what I expected it to be, but I really got myself tangled up in the lives of the characters and cared what happened to them.

I can't rave enough about The Dollhouse by Fiona Barton. It's set in New York at the Barbizon Hotel, in both 1952 and 2016.  In the present, journalist Rose Lewen is obsessing over an old scandal, trying to get long term residents of the building to open up to her and reveal what happened to leave one young woman dead and another tragically scarred. In 1952, Darby McLaughlin had just arrived at the hotel and is in over her head, intimidated by the glamorous models who share her floor and trying to keep up with her secretarial classes because that's the only hope she has for her future. Even though I knew that tragedy was going to strike and had a good idea of how it was going to happen, the book kept me wondering and guessing until the very end. If I have any complaint it's that the present day situation was tied up very neatly, maybe too neatly, over the last few pages.


Disclosure -- I was provided with an advance review copy by the publisher. All opinions are my own. This post is linked to Patchwork Times, Yarn Along, Crazy Mom Quilts , Wrap up Friday
Posted by Michelle at 4:00 AM