Another Towel That Can't Run Away

Having a kitchen towel that's stuck to the stove makes life in the kitchen much easier, especially now that I've learned the trick to making one that doesn't rely on velcro or buttons. 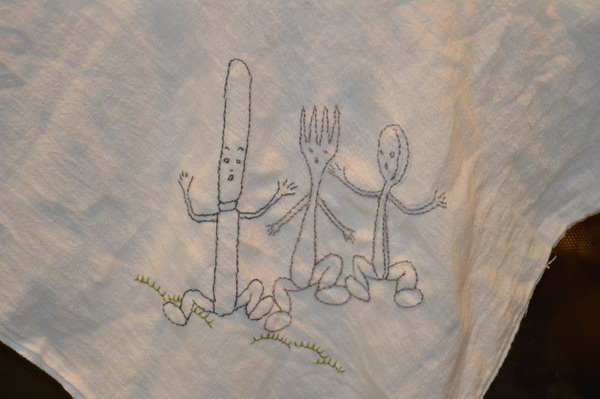 The other night, I went through eight towels while making dinner. I can't explain how that happened, but it did.  Every time I reached for it, my towel was gone. I need more towels with big buttonholes in them. They're not a fool-proof system, but at least it's a bit of a hint that I AM STILL USING THIS AND DO NOT WANT YOU TO WALK OFF WITH IT...

After a trip to Hobby Lobby and a trip to Joann's, I used a coupon and bought myself a flour sack towel. Then I found another one at MECCA  for fifty cents.  When I got home and unrolled that one from its tightly taped little bundle I  found someone else's partially finished embroidery on one corner. Dang!

It was a free-hand embroidered circle with flowers. Definitely not my style and I couldn't have finished it if I wanted to, so I lopped off the stitched corner and did my own embroidery on the opposite end. 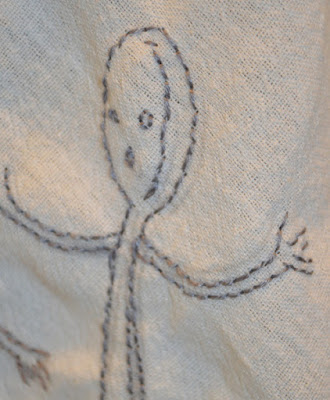 The iron-on transfer slipped and gave the spoon double lines. It doesn't show up as badly now that it's finished, but it sure was hard on my eyes while I doing the stitching.

Now I'm eyeballing my other store-bought towel and wondering if I'd rather gamble that my hand will stay steady while I trace a design or that my vintage iron-ons will do what they should. 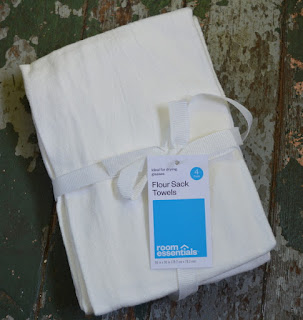 Edited to add -- in a Facebook discussion that had nothing at all to do with embroidery, someone said that Target sold flour sack towels for a buck a piece. I got this four-pack for $3.57. They're not as huge as the ones I've bought in the past, but they're big enough to do the job. I'll let you know how they hold up.

And what I decide to stitch on them.
Posted by Michelle at 4:00 AM