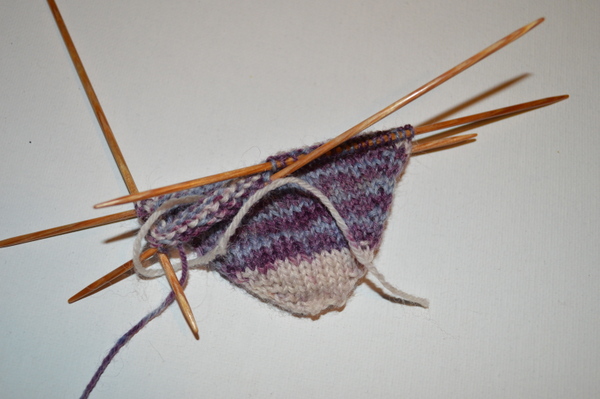 I cast on a new pair of socks before we left for the trip, expecting to have at least the first sock done before we got home. The toe went into my bag and never came out. Now my fingers seem to have forgotten how to move.

Cora Chevalier has been doing everything possible to make her new crafter's retreat a success. When fingerprints that seem to match her good friend Jane's are found at a murder scene, the attendees scheduled to attend her first retreat being to cancel and Cora begins to panic. Jane's fingerprints have been distorted by years of work as a potter, so the match isn't perfect and Cora is sure of her friend's innocence. Unfortunately, some of her new clients aren't.

Death Among the Doilies by Mollie Cox Bryan is the  first in a new cozy mystery series.  It took me some time to warm up to Cora. In the first few pages of the book, she's rushing to the police station to help one of her dearest friends and stops to admire her stained glass window.  Later in  the book, she pauses again to describe her love for the historic house she lives in and it feels much more genuine. With the wide variety of crafts practiced by her visitors and the focus on the healing potential of crafting, I think this is going to be an interesting series to follow.

Disclosure -- I was provided with an advance review copies by the publishers. All opinions are my own. This post is linked to Patchwork Times, Yarn Along.