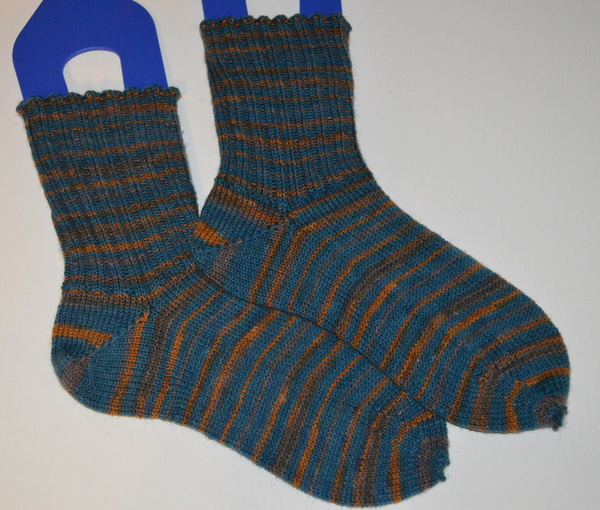 I wish that Sock-Ease came in more colors. Now that this pair is done, I've only got one more skein of this stuff left in my stash to play with. I coveted this yarn and saved it in my stash for years and I should feel glad that I've used it all up for its intended purpose, but part of me (the part that isn't happy with pretty comfy socks) is sad that it's over and done with.

Ever since I finished reading The Crepes of Wrath, the first in the new Pancake House mystery series by Sarah Fox, I've been dying to make some of the recipes that were included. Churro Waffles and Bacon Cheddar Waffle just sound soooo good! Although the main character was sometimes too indecisive for my taste, I'd like to visit the Flip Side Pancake House again in future books.

Seven Skeletons by Lydia Pyne introduces the reader to seven celebrity fossils. Some -- like Lucy and Piltdown Man -- I already knew by name, and others I sort of vaguely remembered hearing about. I was curious to learn more about the subject and hoping that it wouldn't be too dry a read -- instead it's filled with endless fascinating details. The man who discovered the Taung Child sharpened a pair of his wife's knitting needles and used them to careful remove the material that filled the skull. (Later, she left the skull and its protective box in a London taxi.)  The seven skeletons of the title are covered in chronological order and explain how the methods of sharing information between museums have evolved from stereoscopic slides to modern scanning methods -- and how museum displays and public awareness has changed over the centuries.

Toto's Tale and True Chronicle of Oz by Sylvia Patience tells the original story from the dog's point of view. It's been years since I read the book (the last time was as a read-aloud on a long road trip when my oldest was a toddler), but from what I can remember this book follows the plot and style of the original writing pretty closely. My favorite part was the beginning, which tells the story of how Toto became Dorothy's dog. If I have any complaint about this one, it's that I wanted more previously untold details from Toto. (And I might not have needed to know that he peed on the witch!)

Disclosure -- I was provided with an advance review copy by the publisher. All opinions are my own. This post is linked to Patchwork Times, Yarn Along, Crazy Mom Quilts , Wrap up Friday  Keep Calm Craft On

Those socks came out great!

These look great. I wish I could knit!!

Greta socks. I hope they will make more colors, or you can find something that you like as well. Thanks for the book reviews. They sound interesting!