What Would You Call This?

I know what it is. I just want to know what you'd call it. 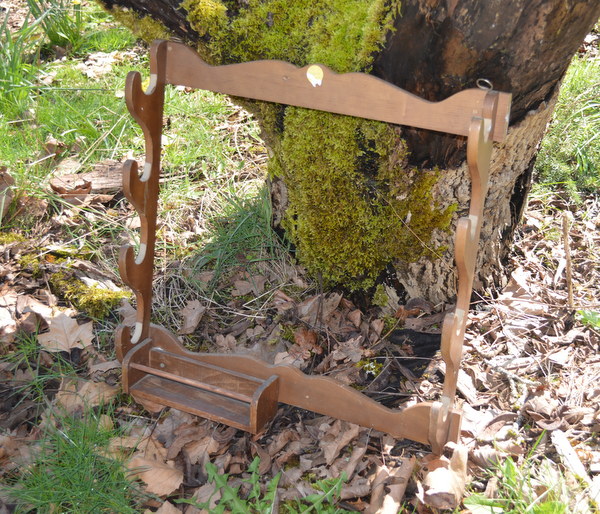 The tag says it's a pool rack. And the thrift shop guy who sold it to me asked if we had a pool table. And now I'm kind of confused about the whole thing because I thought I knew what pool racks and gun racks looked like.

A few weeks ago, I was playing around on Pinterest and found this project. 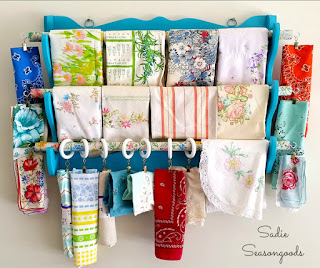 Wouldn't that be perfect for displaying interesting scraps while I figure out what to do with them? Just one problem... to make it I need a gun rack. I know that Hubby had one like it when we were first married, but that was five moves and almost twenty-five years ago. I couldn't tell you the last time I saw it, but it was before any of the kids were born.

If I asked him about it, I'd have to explain what I wanted it for. And he probably wouldn't know what became of it. It might be in the barn, but the odds are probably slim to none. (When we were moving into this house and I was in the hospital on bed rest with our youngest, Hubby left a quickly packed utility trailer full of our stuff in the barn. Someone noticed our absence and helped themselves, so there's still a lot of stuff that might be in a box in the barn, or might have left with them. I'm still trying to account for a dresser.)

If Grandma was still alive, she'd have known exactly what I was looking for and found one dirt cheap within the week. Because she had fairy godmother powers like that.

But I was on my own, without much time to put into the search. Maybe the fairy godmother thing is rubbing off a bit because it wasn't long before I found this one at a local thrift shop for  two bucks. That's definitely a better deal than an afternoon crawling around in the barn and attic. Now I'm on the lookout for some cheap dowels.

Since I bought this one, I've seen two more beat up versions, both labeled "Gun Rack" and both priced at twelve bucks.
Posted by Michelle at 4:00 AM

My first thoughts - gun rack. Then, looking at the portion on bottom left (in picture) that would be the place to hold chalk (? on correct word) for the pool sticks. Maybe that piece was added later. Like the remake idea.

Maybe you can find some fun curtain rods in your thrifting to use instead of dowels. Now that I have seen your inspiration piece I am going to have to find one of these racks for me!

Gun rack - my dad had one in the family room.

The holders look too big to be a pool rack, besides most pool racks i've seen have the cues standing upright (if they were stored on their side, they may develop a bow). I agree with the first poster that it is a modified gun rack. Great repurpose idea! I think I'm going to hunt for one myself!

My first thought was gun rack, also. And I figured the little box was for ammunition. Lucky you, you don't have to go looking and saved 10 bucks!

I'd call it "a bargain!" Definitely gun rack with ammo box as we have a pool cue rack and it doesn't look like this. Well, I've got the dowels found in the free box at a yard sale, now all I have to do is find a gun rack. Karen at https://tunaquilts.wordpress.com/

I think Gun rack...either way the project is cute!

Whatever it is, what it has become is pretty clever!

I'm pretty sure that's a gun rack and the 'box' thing was probably a drawer for the ammo which was removed leaving an open box. Pool racks are normally vertical where they hold the pool cue in an upright direction with the butt of the cue sitting in the base and the upper part of the cue gets slide through a hole to hold it onto the rack itself.

It will be perfect for what you saw though.

My first thought was also gun rack. Pool rack didn't even make it in the top 5. LOL I thought that box part at the bottom might be for ammo, too. Whatever it is, it will work for your project, and I expect you will have a fun time refurbishing it to do just that. Great find for $2. I wouldn't crawl around a barn or an attic looking for anything. You never know what's lurking in there!