More Sewing for the New Stove

This is something I probably should have made for my kitchen a very long time ago. 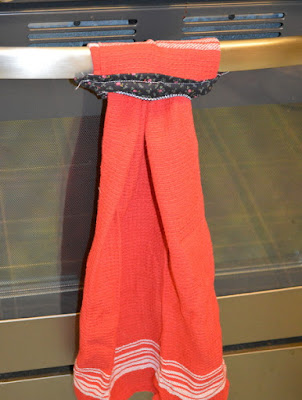 As soon as I drape a kitchen towel over the handle of the oven, it's gone. With five other people walking through the kitchen, most of the time I don't even know who to blame. Half of the time, Hubby is blaming me when I've got the towel in my hand because I'm using it.

Over the years, we've had a couple of different hanging towels with velcro. Those were a pain and got stuck to the other towels. I wound up throwing them out.

Pinterest is full of tutorials for hanging towels with cute buttons, but I don't do buttons without a very good reason. I also don't have the patience to make bows in cute little ribbon ties....and you know someone would tie it to the oven with a double knot and I'd wind up having to cut it loose.

A few weeks ago, I saw some hanging towels that used a big buttonhole to secure them in place. No buttons to fall off. No velcro. I love buttonholes about as much as I love zippers, but I was willing to give it a shot. 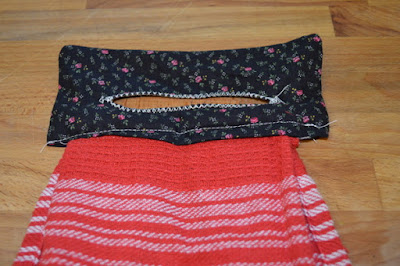 This is not a buttonhole. It's a big slit with two layers of zig-zag stitching around the raw edges. (So yeah, it's pretty much a buttonhole. But I didn't use the magic foot or worry about what size it was going to be, so it doesn't count as one.)

These are the tutorials I was inspired by and then was too lazy to pull up and actually follow:

Buttonhole Hanging Dish Towel  -- This one is easier than what I did and the method I think I'll use if I make more of these with real dish towels.

Fancier Hanging Dish Towel  -- This one is prettier than mine and would make nice gifts, especially if the towels were embroidered.
Posted by Michelle at 4:00 AM

That's actually a really clever idea! I solved my problem having a friend volunteer to make three of the button ones for me. =)

I buy my kitchen towels at IKEA and they are so easy there is a bit of (?) twill tape on the back of one corner on the diagonal so you can loop the towel through to stay on the stove handle

I love this idea. Colleen's idea sounds good too.