For years, I've been wanting to make a scrappy snail's trail quilt and putting it off because it sounds hard. Somehow, I managed to completely forget that I've already made a quilt with that block in it.

Made in 2009, this is another one of those quilts from my phase where I'd see a pattern and think "I think I could do that -- I should try!"  It's starting to seem like I made a lot more leaps of faith back then. 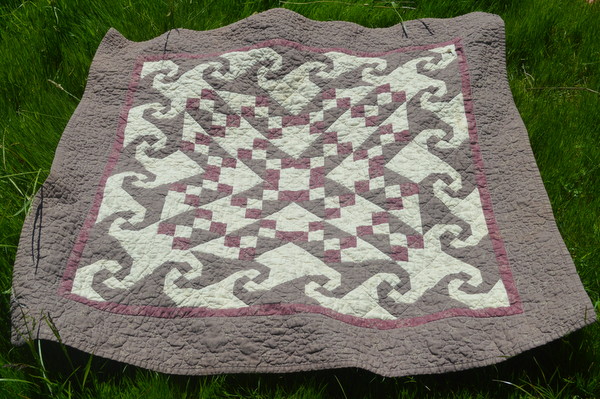 The pattern is from Quilter's Newsletter. (Sorry, but I can't remember it's name or which issue it was in. If it helps, it's the same one as North Pacific.) It's one of those rare projects that I bought brand new yardage to make...and then actually made the quilt I bought it for.

There's a hole in the upper right hand corner that goes all the way through the quilt. I'm not asking too many questions. This one was made during the same period as Scrappy Mountains (which had a run in with some safety scissors) and Birds in the Air (ball point pen on the white muslin back) and whichever quilt it was that they duct taped pennies too. I was sad at the time, but I've gotten over it. And I think this one might be honest wear-and-tear. Or possibly the handiwork of my Whirlpool Cabrio.
Posted by Michelle at 4:00 AM