A couple of years ago, these three lantern blocks appeared in my sewing room. They're scrap bag orphans, not my own handiwork. And, while I'd love an entire quilt made of them, I know I wouldn't want my blocks set on point or assembled exactly that way. 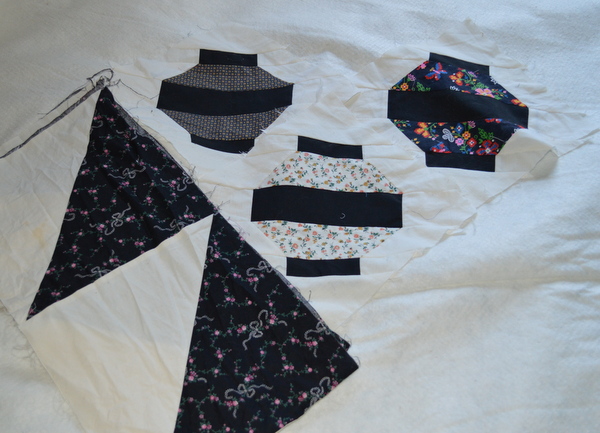 Last summer, the half square triangles appeared. There's a strip of eight of them -- maybe someone's abandoned border? -- and I put them in the pile of orphan blocks that I'll find a use for one of these days. It wasn't until much later that I realized the lanterns and half square triangles might play well together.  Then I found the blue stripe.

I think I've got the elements of a pretty little quilt here! There's enough of the blue stripe to use some for the front and also have a coordinating backing. 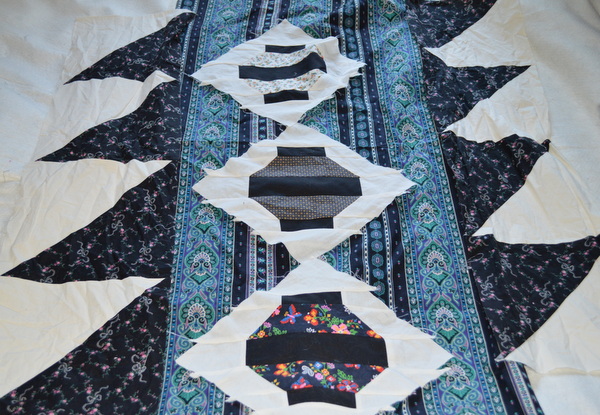 Since there's no way I'm going to fuss with stripes for the setting triangles, would you go with white or solid black?

This post is linked to Design Wall Monday at Patchwork Times.
Posted by Michelle at 4:00 AM

What a great combination! I understand your hesitation, but the lanterns look so nice on the stripe ... White would be blah, and black might not match the black in the HSTs unless you separate with a strip of the blue stripe. This is my favorite type of conundrum. I know you'll come up with something striking.