Ever Stayed in a Haunted Hotel?

Would you stay in a haunted hotel? Or take your kids to one? Apparently, we've done it more than once. 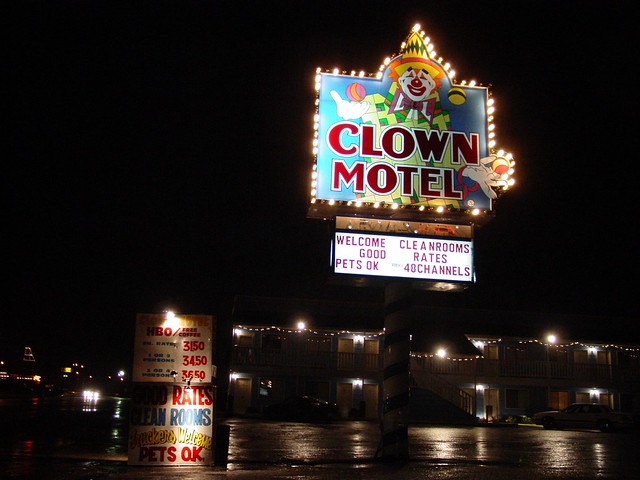 I didn't realize that we were supposed to be afraid of the Clown Motel in Tonopah until someone told me they'd seen it on Ghost Adventures. After that, I looked it up online and then refused to believe that it was actually next to an old cemetery. I couldn't have possibly stayed there so many times without noticing the creepy old burial ground, right? We checked it out on Google Earth, which proved that I could. It's right there, adjacent to the parking lot. And somehow none of us ever noticed.

The internet makes the place sound absolutely terrifying. Like I said, we've stayed there five or six times and never even knew that it was supposed to be haunted, let alone had that "oppressive sense of creeping dread."  I agree with whoever said that the sign out front makes it look like something out of a Quentin Tarantino movie, but it's cheap and not at all bad for the price.

The place we stayed one night in Montana could still give me nightmares fifteen years later. When you can get a cabin that will sleep five people for thirty-five bucks, that should be a huge red flag. So should the fact that the guy in line ahead of us had three big dogs and it was just fine with the owners. And the fact that it was the only place for miles with any vacancies. I spent that night half expecting the guy in the hockey mask to burst up through the uneven floors because that run down cabin would have been perfectly at home on the shores of  Crystal Lake.

The haunted hotel I do want to visit and take my kids to? The Stanley, in Estes Park Colorado. Because that's the hotel The Shining was based on and the place is absolutely gorgeous.

I guess I'd have to believe in ghosts in order to be afraid. I'm also not afraid of clowns. LOL Sounds like a great spot to stay.