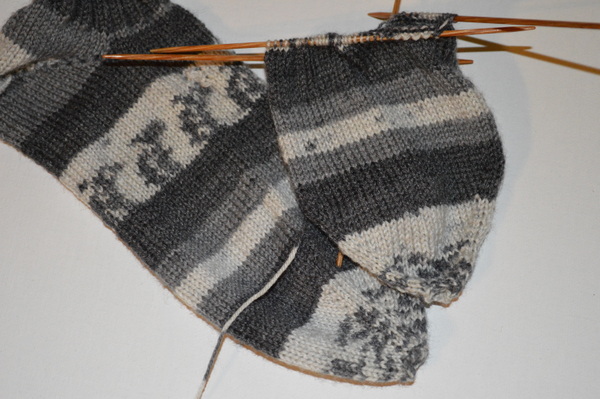 After Sock Madness forced me to learn to cast on toes the right way, I thought I was a convert. But I'm still happily using my cheater method. It works just fine and doesn't require me to think as hard and once I'm wearing my socks, no one sees the tips of my toes but me.

These days, I read as many thrillers as I can get my hands on, so as soon as I saw Since She Went Away by David Bell it went on my list. Wanting to recapture some of her old spontaneity, Jenna Springer called her friend Celia and arranged to meet her best friend at the park at midnight. Events at Jenna's house delayed her and when she reached the park the only trace of Celia was a single diamond earring.  For months, Jenna has blamed herself. The media, which latched eagerly onto the story of the "Diamond Mom," blames her as well and when, at a particularly stressful moment, she verbally lashes out at a reporter, they start to ask if she knows more than she's telling. I immediately liked the characters and wanted to know the rest of their story. They felt like real people and felt like their secrets were as plausible as secrets in this sort of book can be (except for one scene near the end which I just couldn't suspend my disbelief enough to accept.)

I suppose it's a sign that you like a mystery series when a news story about a local glass company being forced to stop production makes you wonder where the fictional characters are going to get the supplies they need to keep teaching their classes. The third Webb's Glass Shop mystery, Cracked to Death, is out and this time Savannah is teaching a class on how to melt glass bottles into useful objects. A pair of bottles brought in by one of her students catch her attention. They're obviously old, so she wants to do some research before putting them in her kiln. When the student's body is found on the beach with the remains of a third bottle in his dive bag and one of her employees becomes a suspect, the local police rely on Savannah's glass expertise. So far each of the books in the series hasfeatured a different glass technique which always ties in with the murder mystery. There's plenty of vicarious crafting and an intriguing mystery.

Tracing the Bones by Elise A Miller is another of those domestic thrillers I love so much. An unhappily married woman whose writing career consists of jotting ideas on whatever scrap of paper she can get her hands on becomes entangled in the tragedy that strikes the perfect couple next door. The plot kept me asking questions and turning pages, but was never believable enough to me to shake that "it's just a book and this could never happen" feeling.

Disclosure -- I was provided with advance review copies by the publishers. All opinions are my own. This post is linked to Patchwork Times, Yarn Along, iknead2knit
Posted by Michelle at 4:00 AM

love the socks thanks for the books suggestions

What is the cheater toe cast-on? I do a criss-cross cast-on but would love to learn a different way. I really like your black and white socks: I have difficulty getting mine to match.