mindless knitting at its best

I'm still knitting away on my witch's hat. 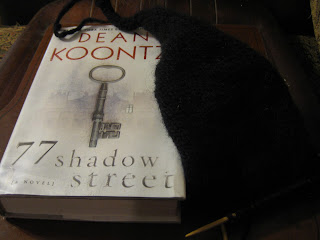 It's a project I've been meaning to cast on for a long time...it's seasonal -- not to mention the right season...the yarn was dirt cheap...

The only possible thing not to love about this project is that the yarn is so black and I'm knitting at such a tight gauge that  I can only begin to make out the stitches when I stand directly under a bright light. If I drop one, I'm in trouble. But so far that hasn't happened.

This is the ultimate in mindless television knitting. Until I hit the brim, there's only one increase at the beginning of each row. Other than that, I can knit without looking down.

The book is 77 Shadow Street

by Dean Koontz. As much as I love haunted house books, this one is a disappointment. It keeps jumping between different characters whose only connection is that they live in the same apartment building where something bad it suddenly happening. I don't know if I'll keep slogging through this one or go back to Julia Child's letters.

I hate stories that jump back and forth too.

Bravo to you for knitting with black yarn! I agree, it's hard to see what you're doing. Light colored needles as well as good lighting sure does help. It'll be fun to see your finished hat. What a neat and timely idea!