new ways to have fun

Last week, someone told me that her family used to describe coping with bad luck as "finding new ways to have fun." I think I kind of like that description.

We've been having lots of fun.

There was the windstorm on Sunday, which hit out of nowhere and knocked out the power just as we were leaving the house for a drive. I totally wimped out on that one, and instead of cooking dinner on the gas stove and winding up with a pile of dishes that couldn't be washed until we had power (and running water) again, we headed a couple of towns north and got dinner at a drive through, then wandered around the Dollar Tree and Target and Fred Meyer until it was late enough to plunk the kids straight into bed when we got home. Just as I got the oil lamps burning properly, the power came back on.

Monday morning, it was a computer virus on the laptop that wouldn't let me open any other programs. I cried, I called around to see how much it would cost to have someone fix it, I cried a bit more, then I tried to be patient until evening when I could call my cousin the computer god. By the time he called me back, I'd convinced myself that it made more sense to reinstall windows and lose my data than spend the hundred something to get it fixed. (The money that I'd otherwise be using to get the Janome serviced -- I've got my priorities!) But he gave me some easy directions to follow and it's all better now.

Last night, a part on the furnace broke. One of those important parts that makes it make heat... So I spent my morning tracking down a replacement, and my afternoon driving to get it. If all goes well, we'll have heat back tonight.

And there's the usual chaos. But really, I think that's enough fun for the first half of the week, don't you? None of it is all that serious, but it's wearing me out.

There've also been a coupe of new ways to have real fun. I finished the drunkard's path blocks and made myself try a couple of different layouts before deciding how to put them together. 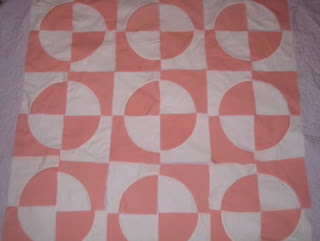 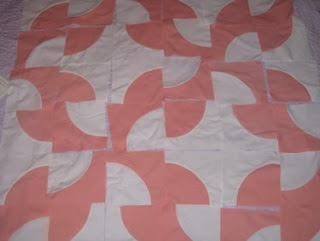 I'm going with the traditional drunkard's path layout, but will probably do the circles later with a different fabric choice.

And I got the other two color quilt meandered and bound. Those extra seams are there if you look for them, but they're not at all distracting. 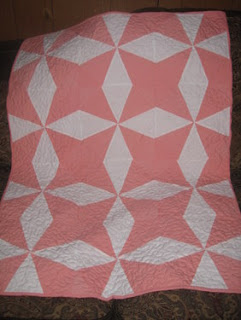