I've mentioned the baby hats, but I haven't posted any pictures of them because they're not all that exciting. I've come up with some color combinations that I love, but I'm not sure anyone else wants to see baby hats day after day after day.

This is what I've been up to since about mid-December -- 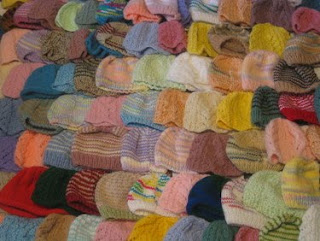 Ninety little hats, all on their way to Mercy House, along with a couple of baby quilts because there was extra room in the box. This is the post that made me want to do something for Mercy House. And that's most of what I know about Mercy House, along wih the other posts I've read at We are THAT family. I stumbled across it by accident and it hasn't left my mind for long since.

There were supposed to be a hundred little hats if I met my goal. At one point, I counted and there were a hundred and six. I don't know where the others are. I really thought they'd turn up yesterday as soon as I got home from the post office, but they're still hiding.

I've been up to more than washing and boxing baby hats. Everyone's been talking about the Jelly Roll Races, so I cut some 2 1/2" strips from my birthday fabric and made a little jelly roll quilt. 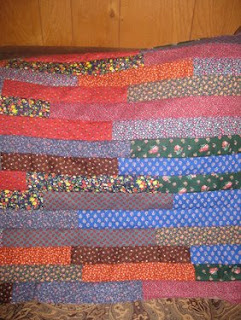 It was easier than my last little attempt, since someone told me you don't have to worry about the strips twisting, but the measurements aren't quite what I wanted.

And I got a second little top done, but that one deserves its own post.
Posted by Michelle at 6:25 PM

Those little hats are adorable and the website you linked to is very thought provoking. Thank you :)