I might've been a little spoiled this week....

It stated with the four books and Joann's gift card Mom gave me for my birthday, early because I wasn't going to see her today.

Then Grandma showed up with this... 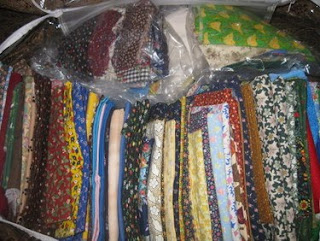 By weight, I'm estimating that it's sixty-eight yards or so....but there's some metal in the bag, so maybe my numbers are a bit high... And she got it all for $13.50. Have I mentioned how good at this sort of thing that woman is?

Friday morning, I saw the ad for the estate sale --

Quilters (tons of everything you have ever wished for), sewing, knitting, crocheting, pretty-punch, unimaginable amount of material, yarn, crochet thread, silk flowers, styrofoam, so much more!

The kids had an activity that afternoon, I had commitments that morning... there was no way for me to make it up there before they closed. So I called Mom and read her the ad. She called me from the sale a bit later and said it was all too expensive. I've seen garage sale fabric priced higher than the clearance rack at the nice quilt shops, so I assumed that was what she meant and got on with my morning.

Then the kids' activity got cancelled and the barber shop was closed and I had time to drive up myself. By the time I got to the sale at three, there was nothing even vaguely resembling cotton left. The people running it were taking down the signs -- an hour early.

I did get a largish box of partial yarn skeins for $4.50, which was plainly labeled "Do Not Stir." Seriously? I understand that you don't want people dumping it all over the garage floor, but is it that unreasonable to want to know what's under the top layer? I gambled that what I could see was worth the money. I thought about moths, but we've got a freezer and I promised myself I'd look at it all closely before it got close to anything edible. Because I knew I'd have doubts whether I bought it or left it.

Then I went over to Mom's and saw what she'd bought. Forty-five yards of really nice fabric, that she bought for $2 a pound. Unlike me, who weighs or measures roughly with my arm or just makes wild guesses, she took her tape measure to this fabric and measured it to the inch. 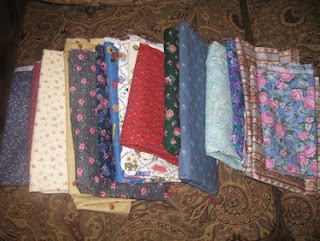 And after seeing how nice and clean this fabric is, I'm not worried about bugs anymore.

Does adding 90 yards of fabric to my stash in three days count if it was all birthday gifts?
Posted by Michelle at 3:42 PM

WOO HOO!!! and Happy Birthday!!
Whether you add it to your stash stats depends on how you count it ... but I think as it is presents you're entitled to not count it if you wish! Just enjoy :)