The Hobby Lobby Incident of 2018

I'm not sure who to credit, but when the cross-stitch kits went on clearance, someone on one of my stitching groups dubbed it the "Hobby Lobby Incident of 2018." I bought my share of kits and I've been pretty much banning myself from Hobby Lobby for the past couple of months to avoid further temptation. I did pop in once to confirm that they cleared most of their cross stitch stuff...and that they had brought in better, more tempting stuff. 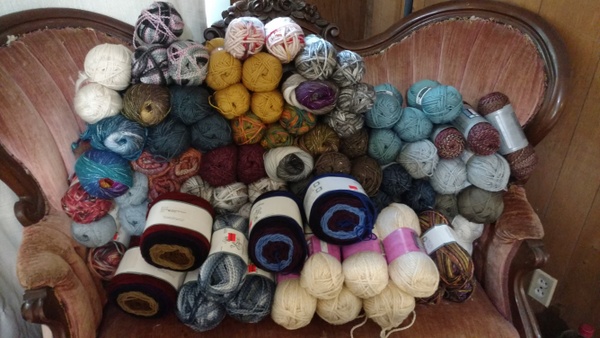 If my math is right, that's $534.24 worth of gorgeous yarn that's going to become shawls ...except we all know that I never in a million years would have bought it all for full price, no matter how pretty the yarn is or how giddy the yarn fumes got me. I spent a quarter of that. Less than yarn was going for at that estate sale a few weeks ago, or what the thrift shops around here would charge... And did I mention that it's brand new, straight from the craft store, in colors I actually chose on purpose?

Yesterday, I stopped at Joann's to look for one thing. Apparently it's been a while -- the whole store has been rearranged. And the yarn prices I head in my head while I was figuring out my Hobby Lobby splurge must've been from a few years back. When did the prices shoot up that high?
Posted by Michelle at 4:00 AM