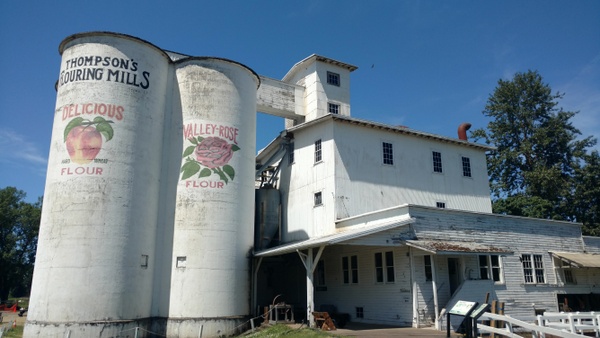 There were factories before there was electricity. You probably knew that already, but I wanted the kids to see how water could actually power the equipment. As soon as I came up with the idea of visiting a different museum every month and started making a list of destinations, I put Thomson's Flouring Mills and the Thomas Kay Woolen Mill high on the list.

Last week, the whole family went to the Thompson's Mills State Heritage Site and took the guided tour. We visited years ago, but all three boys were too young to remember and back then we did the self-guided tour which doesn't cover nearly as much of the mill.

The volunteer who guided us through the mill was obviously passionate about her job. Here, the boys got to turn the gears by hand to see how the system worked. She also showed us the clips used to repair broken belts...which are an older version the same type my husband uses at work.

It's amazing how many things tie together. We also learned about water rights in Oregon and watched swallows scoop mud from the riverbank and carry it up to their nests in the eaves. I can even tie this in with quilting because the mill packaged their flour in those print sacks we all love so much... 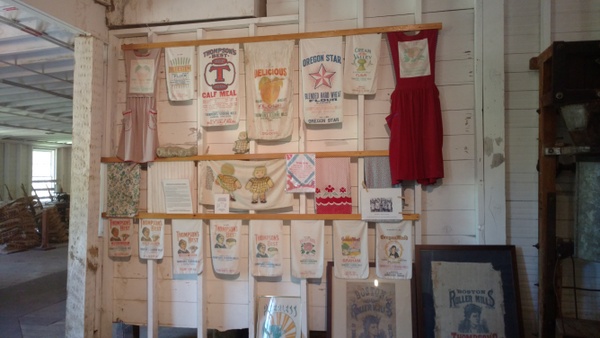 After the demand for flour dropped after the first World War, the mill shifted its production to animal feed. Then it was used to generate electricity.  What's on display now is  a combination of equipment from both eras. The self-guided tour we took years ago didn't let us down into the basement and we didn't get to see the water rush through and start turning the gears, which is pretty impressive.

I absolutely recommend this state park if you're in Oregon or travelling through. Admission, including the guided tour, is free.
Posted by Michelle at 4:00 AM

What a lovely idea - a museum a month. I've just moved to a new area and that would be a great way to get to know the area, rather than just making shopping trips or driving around aimlessly. Thanks for the idea.