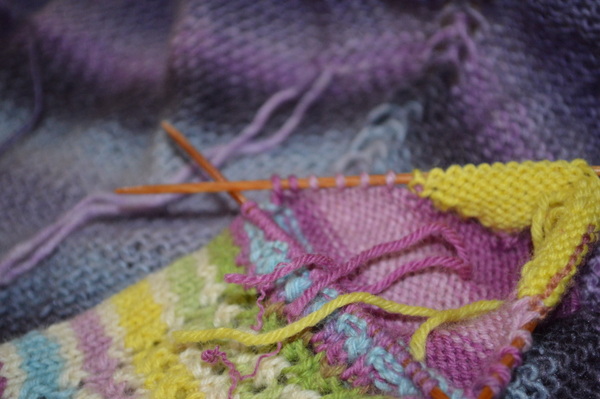 You can't see it in the picture, but there's a pair of ends tucked inside the blue stripe just before the heel begins. There are also the two pairs of ends that you can see. That makes three knots in the yarn in barely as many inches of sock.

I've used more than a dozen skeins of this yarn and rarely had one with a single knot. Mid-heel isn't a good spot to be cutting the yarn and starting over, but I don't have enough extra yardage in the skein to do much else (assuming that there aren't more knots lying in wait) and it would disrupt the pattern repeat if I did go back to the first break and start over there.

There are also two breaks in the yarn for the shawl, but I knew that when I cast on. What frustrates me there is that I didn't think about spit splicing them until after the fact. Instead of worrying about how I'm going to weave those ends into the loose stockinette and having it look nice, I had the perfect solution right in front of me and completely missed the opportunity.
Posted by Michelle at 4:00 AM

Ok, I know nothing about actual knitting except what I've learned on your blog, so you can just ignore me if you want. I was wondering if you are making toe up socks, if you could unravel them and make neck down ones (don't know the name for this) and have the breaks in the yarn come out in the neck of the sock instead of the heel? Just a thought from someone who only crochets. I do know how frustrating it is to have a break in the yarn, especially in a difficult area. I'm crocheting a virus shawl and have just run into a break in the most lacy row. It has aggravated me enough so that I've set it aside for a few days now. I might be ready to work on it again by next Wednesday. Ha! That's the day I get together with friends and do hand work. I better resolve to do something with the break by then or I'll just sit there for 2 hours talking. Not a bad thought. Have a good day! Susan

I feel your pain. Since I am a sock knitter too, I've not run into too many knots in my skeins (thank goodness), but when I do, I have been using the "invisible knot" technique and it works beautifully. It doesn't matter if it's in the heel, or toe area, you cannot see or feel there is a knot there and it's very strong. I'm making lots of "Frankensocks" these days -- using leftover pieces of any color and they do not match each other, so adding on with different yarn would not be a problem for me! Good luck with this pair. Hope there are no more knots in the rest.