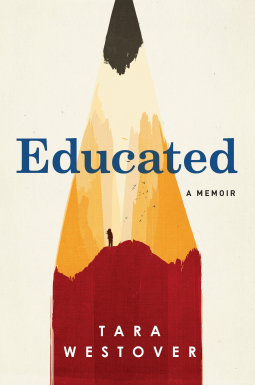 It seems like I may be the only one out there who isn't raving about Educated by Tara Westover. It took me a month to get through the book and, as intrigued as I was by the cover copy with its description of a young woman growing up in a survivalist family, I had a hard time getting into the book itself.  There are so many horrific injuries that go untreated. There is so much abuse among the siblings. At one point, Tara's mother tells her its time to move out of the house because the woman believes her daughter is four years older than she actually is.  It was all too much for me to take in and, after Tara rejected several offers of help, I started to lose patience with her. (And then I felt bad about that, because this is a woman's actual life and not a work of fiction.)

Over the past couple of years, I've read a lot of what I just learned is called "misery lit." Sometimes it's the writing that makes me keep turning pages.  Sometimes, the writing isn't great but the story is so fascinating that I want to read it anyway. This book fell somewhere in the middle.

What I did get immediately caught up in was Wild Wild Country, the new Netflix series about Rajneeshpuram. I was about ten years old when the Bhagwan and his followers came to Oregon and I remember hearing about them and then eventually knew that they were gone. Years later, I read something about the bioterror attack on the salad bar, but I had no idea.  Six hours of documentary footage later, I went and checked out a library book because I've got so many unanswered questions. If you do watch this one, beware of that TV-MA rating. Most of the show is pretty benign except for some occasional language -- and then there's the footage that was filmed by a journalist who smuggled a camera into a meditation session.  And some much less disturbing footage of nude sunbathing.  It's only a small fraction of the whole thing.

Anyone else reading misery lit or watching documentaries about freaky cults? Got any recommendations for me?


Disclosure -- I was provided with an advance review copy by the publisher. All opinions are my own.
Posted by Michelle at 4:00 AM

That's not the kind of book I read (I'm a S.F. or Y.A. gal), but wouldn't that cover make a great quilt? I'm not sure it would be the kind of quilt I'd be good at making, but with the right quilter, wouldn't it be gorgeous?

I was watching last week's Brooklyn Nine Nine and had to keep pausing to draw a quilt idea based on some wallpaper-carpet in the background of a karaoke room.

You know you're a quilter when everything gives you quilt ideas!