Remember that shawl I showed you on Tuesday? It's a completely different shawl now...and yes, that's the second time in the past four shawls that I've completely changed my mind after days of knitting. 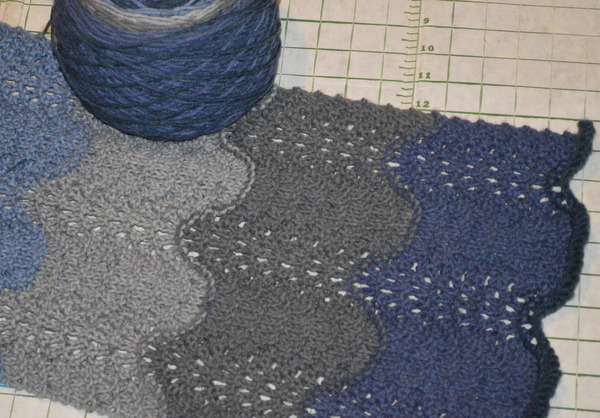 This version is much drapier and much closer to my original idea for the yarn. It's also easier to knit without looking at the pattern or counting rows too closely.

Have you heard about Veronica, that new horror movie on Netflix that's so scary people aren't able to make it more than halfway through?  My oldest son and I watched it late last night. Set in Spain in 1991, the movie begins with three girls holding a seance in the basement of their Catholic school while everyone else is up on the roof watching an eclipse. It's a horror movie, so you know that trying to contact Veronica's dead father with a ouija board that boasts "as seen on TV'' on its packaging isn't going to end well.

We made it through the whole thing with no  nightmares to report, although the movie was much creepier than I expected it to be. And not, as I halfway expected, so yucky and gory that we turned it off instead of dealing with that. I've never, as an adult at least, turned off a movie because it was too scary. I have turned  them off because they were too gross -- and a couple of times I've sat through things I should have turned off and then wanted to scrub my brain with bleach.

You know how scary The Exorcist is supposed to be? This is that kind of scary...maybe. I didn't see that one until I was an adult and, while the book unsettled me, the movie didn't have much of an effect. Unlike Rosemary's Baby or the original Stepford Wives. Those kept me from sleeping.

If you're going to watch Veronica, actually look at what's happening on the screen. Some of the best scary parts are easy to miss. My son didn't see a couple of them at all and I only caught them myself because I was reading the subtitles and had my eyes at the right place at the right moment. Which kind of makes me wonder if some of the other not-great horror movies I've seen over the past few years would have been better if I'd been watching the screen instead of my needlework...