The Old House is Gone Now

Ever since we bought our old farmhouse in the summer of 2005, I've been watching the steady deterioration of the old house on Honey Sign Road. First, the roof was just badly sagging, then the roof was gone and one exposed wall was leaning... 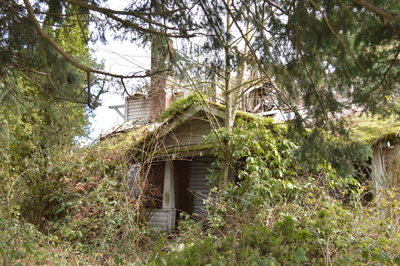 After each big storm I'd make a point of driving by to see how the house had weathered it. There were still drapes hanging in the windows and we'd speculate about whether there was still furniture inside and what the story of that place was. 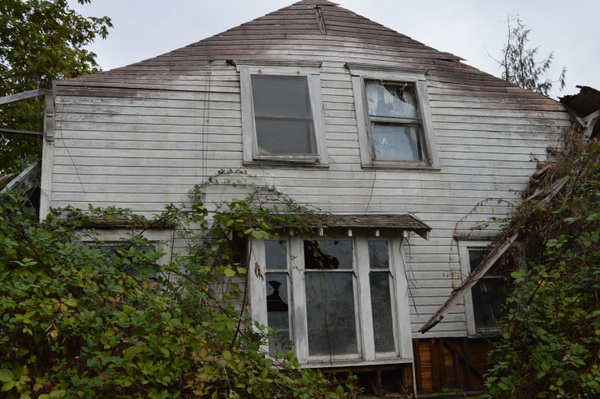 One year, they cut back the blackberries and exposed this side of  the house. The way it's situated along the highway, it would have been pretty much impossible to get good pictures without trespassing, although I was seriously tempted over the years. The place absolutely fascinated me.

A few weeks back, we drove by and saw a truck from the gas company in the driveway. I thought that that was a bad sign. Now, the house is gone except for a chimney and a pile of stone rubble.

I knew that sooner or later I'd drive around that curve and there wouldn't be a house there anymore. But I'm still mourning just a little bit. As my youngest son pointed out, someone owned it and they could do whatever they wanted with it. I imagine that it became too much of an insurance liability. It couldn't have been saved.

It's not like cutting down three hundred year old fir trees just for firewood. That's what the previous owner of this place did, just before putting it on the market.
Posted by Michelle at 4:00 AM

where I live many, many homes are gone now that were here when I moved to Iowa as young bride and mother. 40 years have gone by and so much has changed. the memory of those that lived in those houses now just that with no tangible marker they were there. Your son was very pragmatic about it but I like you would think of all the families that had walked through those many different doors I can no longer see. take care from Iowa

I agree that is so sad. It's too bad someone didn't try to save it. Maybe they could have bought it for a song. Now we'll never know. Have a good week. Be watching the mail for a little package. Nothing to get excited about, but just a 'thought of you' kind of thing.:)

I know!! I was away for a few weeks and when I came back one of my favorite old houses was just gone, nothing left but some brown ground. it was a shock. I like to imagine the lives lived in those walls, in the olden days. There's a couple folks on YouTube who go thru abandoned houses and film them, it's quite interesting.