Getting on my Soapbox for a Moment...

It's apparently the season for those PSAs about "buzzed driving" and how getting caught can cost $10,000.

Ten thousand dollars is a lot of money, but compared to what our family went through after Hubby's head on collision with a drunk driver three years ago, it would have been a walk in the park. I realize that comparing the fines that the drunk driver pays to what their victims have to cope with is comparing apples and oranges...but I can't stop making the comparison. Seems to me like the argument they make in those PSAs should be "You could KILL SOMEONE"  or "You could injure someone so badly that they can't do their job anymore" instead of just "It'll ruin your budget and maybe embarrass you" (A friend has explained the logic behind those ads, but it doesn't mean I have to like them.)

Over the past few years, I've heard a lot of horror stories. I may not know much more about the parents of my kids' friends, but I know about their accidents and their injuries. People get hurt. They lose their only means of transportation. If there is insurance, it usually isn't enough to make it better. 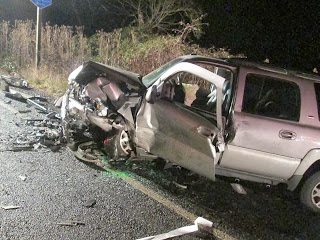 As bad as that picture looks, and as bad as it was, my husband is lucky. He'll never be the same as he was before that other driver crossed the center line, but he's alive and on his feet.

I don't think I need to ask any of you not to drink (or take meth or oxycodone) and drive. But maybe we'd all be safer if society didn't treat drunk driving as something that's okay if you don't get caught. Or something that a good lawyer can get you off the hook for.

Please drive safely. And please take a look at your insurance coverage and make sure you've got enough to cover a bad accident. We had a good policy and it still wasn't enough to make up for the medical bills and months of lost wages.
Posted by Michelle at 4:00 AM

Great post! I'm glad you're husband survived that horrible looking crash, but the aftermath sounds like it was tough on all of you.

Thank you for the reminder to be careful drive safely and do not drive while impaired or distracted .

TV advertising in my area are reminding us that driving while under the influence of legal substances drugs that impair our driving is still an illegal thing to do.

I agree with you 100%. I think it would be a lot better if someone who caused a horrific accident like this had to spend their lives paying for the cost - and even supporting the family of someone who is killed or can't continue to work.

I agree also. I think the penalties should be much higher for the first offense. My brother was caught twice drinking and driving. He paid fines, did some weekends in jail, lost his license for a short bit. And then third and last time he lost his life. Luckily no one else was involved in the accident. My mom tried to blame it on everyone but him, his girlfriend that made him angry, his ex-wife. But I saw it as he was given every opportunity to correct his bad behavior. Don't get me wrong I loved my brother and miss him very much. But I'm thankful his kids weren't in the car or that no one else was injured or killed in his accident caused by drinking and driving. When the coroner told us they could smell the alcohol on him my mom was embarrassed. She told me to never tell anyone he was drunk. I'm sorry but if I can save one person by telling them the truth, I will.

We in Australia tend to put it a bit more bluntly. Our standard State government anti-drink driving slogan is pretty much to the point. "If you drink and drive, you're a bloody idiot."