Lately, I skip the risks and stick with techniques that I know will work. I wasn't always such a chicken. Looking back at what I was knitting ten years ago, I couldn't imagine doing half of that stuff now. I don't know when things changed. Maybe it was because back then everything was new and I didn't have an arsenal of tried and true methods? Maybe I've got enough stress in my life these days without venturing off into uncharted territory? 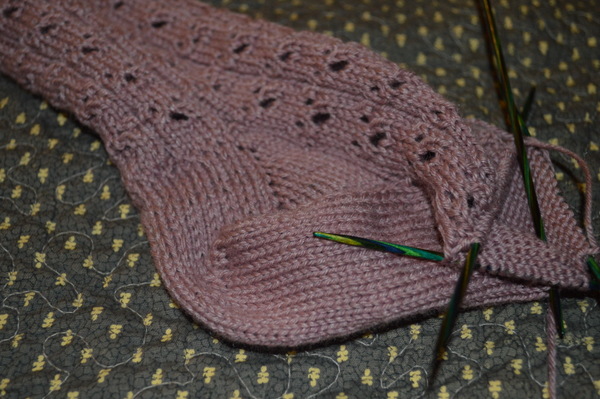 This heel is different from anything I've done before. It had me forming the gusset stitches as I knit the heel flap, then turning the heel, then doing the decreases. I have no clue how all of that actually worked, but it's a heel and I didn't have to pick up stitches along the edges of the heel flap.

It would have been easier to knit my regular short row heel instead of following the pattern as written. About halfway through, when it was looking nothing like I thought it should, I was wishing I'd stuck with familiar territory instead of deciding to experiment.  But everything worked out.

Now I get to look forward to doing it again on the second sock.

Jean Taylor's husband is dead and there's no reason for her to continue to hide his secrets. The press has hounded her for years, but now that they know she's free to speak her own mind about Glen and the missing child they're more persistent than ever before. The Widow

by Fiona Barton isn't Jean's story alone. Alternating chapters are told from the point of view of the reporter who is finally about to get her dream story and the officer who investigated the kidnapping. The timeline shifts between the present day and the day of the kidnapping, which kept me wondering how much Jean actually knows about what happened. I enjoyed the read, but the ending left me wanting something more.

The publisher provided me with an advance review copy. This post is linked to Stitch Along Wednesday, Patchwork Times, Yarn Along, iknead2knit.
Posted by Michelle at 4:00 AM

What pretty socks. I tend to stick to my comfort zone when it comes to heels. There are so many good ones I should try though.

I love the lacey look.

Yeah, especially for self stripe yarn, I do what is easy and comfortable....I want to show the yarn off.....good luck with the new heel..

Lovely socks and usually I trust the author and it pays off - usually!!

That's nice that you didn't have to pick up stitches!

I did that same heel on Weeping Angel and loved the way it worked out. What is this pattern?