Top down socks aren't my favorite, but if a stitch pattern is directional and I like it enough, I'll do it. To get these silently screaming faces going the right direction, it's worth it. Until I get to the heel, which uses a technique that I haven't tried before, this will be easy knitting. 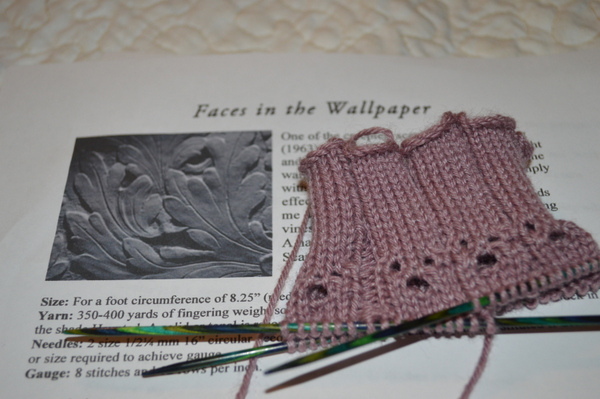 And when I'm not knitting, I'm reading...

Death and the Brewmaster's Widow

, the second Auction Block mystery by Loretta Ross, is just as good as the first book in the series. It picks up right where the last book ended, which was a little disorienting for me (after a year my memory for detail is less than great), but as soon as I figured out what was going on, I remembered why I love the characters of Wren and Death so much. They're a wonderful couple. So many books rely on jealousy and misunderstandings to keep things interesting, but this author avoids those cliches.  And this time the mystery is so close to home that I ached for the characters. While Death was overseas, his brother, died in an arson fire at the Brewmaster's Widow, an abandoned brewery. The badge that's just been returned to Death, the one recovered from his brother's body, has the wrong number on it. There shouldn't have been a badge on the body at all because Randy broke his own badge the morning of the fire and left it at the fire station.  The old brewery and the network of caves beneath it aren't at all safe, and the arsonist still hasn't been  caught,  but Wren and Death are determined to find out what really happened the day of the fire.

by Pseudonymous Bosch looked like it might fit the bill. It probably would have been better if I'd read the first book in the series first. Set on a fog shrouded volcanic island with a dragon and a flying teepee, this book reminded me a little bit of the Series of Unfortunate Events and a little bit less of Miss Peregrine's Home for Peculiar Children. It's quirky and kind of fun.

The publisher provided me with advance review copies. This post is linked to Stitch Along Wednesday, Patchwork Times, Yarn Along, iknead2knit.
Posted by Michelle at 4:00 AM