I'm glad that this one is finished, partly because it's going to be great for snuggling up in and partly because I'll no longer have to struggle with spelling Snoqualmie. (Do I get any credit for knowing how to pronounce it?) 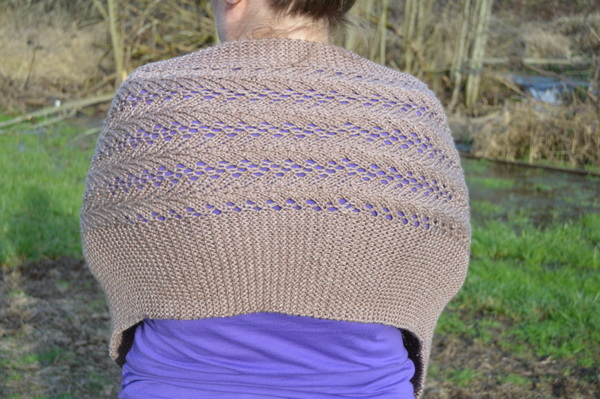 The pattern, Snoqualmie Wrap, is from Wanderlust: 46 Modern Knits for Bohemian Style

by Tanis Gray. I found the book at the library and I love the fact that all of the projects are for worsted weight yarn. The designer had superwash wool in mind, but I've got a stash full of acrylic. 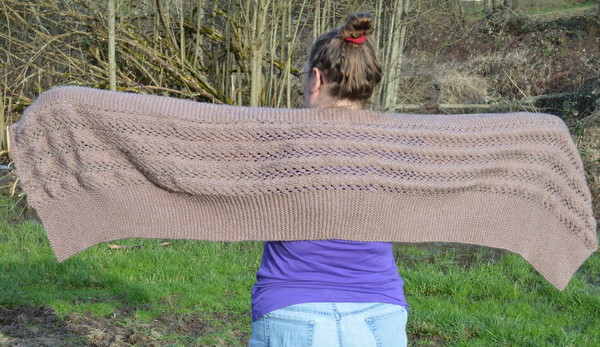 For this wrap, I used up three skeins of Caron Simply Soft Heathers. The pattern calls for about 1000 yards of yarn and I had 750. I told myself that it would be fine. I'm short and probably didn't need 74" of wrap. I haven't measured what I wound up with, but it's plenty of wrap for me.

The mix of garter stitch and simple lace it just perfect. I could work on it while watching television with the family and, with an eight stitch lace repeat, it was easy to count back to a yarn over if I lost my place. It took a couple of weeks of evening television knitting.

Along with the knitting, I've been reading...

The second book in the Sketch in Crime mystery series by Deidre Verne is out and I was happy to get my hands on a copy. In Drawing Blood

, CeCe and her Freegan friends are helping the police investigate the murder of the man who manages the local dump. His death may have appeared to be a tragic accident, but there's a lot more going on at the facility than first meets the eye. Instead of focusing on CeCe's dumpster diving activities, this book concentrates on the criminal aspects of recycling. That's in stark contrast to her father and the genetic research he was doing, which has left her with plenty of unanswered questions.  I love the characters, and the subject matter makes this different from any other cozy series I've read.

Carrie Morgan's son vanished from his car seat while she was digging in her purse to find change for a parking meter. Then, a year later, she finds him safe and sound in his crib. It's a confusing miracle. Ben hasn't grown or changed at all. And, twenty four hours later, he vanishes again.  One More Day

by Kelly Simmons is an intriguing domestic thriller. Carrie is fragile and her husband seems convinced that she needs constant supervision. This is a disturbing domestic thriller. I can't tell you more without giving too much away, but if you like guessing until the end, it's a good read. I do wish the author had tied up a few more loose ends.

The publisher provided me with advance review copies. This post is linked to Stitch Along Wednesday, Patchwork Times, Yarn Along, iknead2knit, and Crazy Mom Quilts.
Posted by Michelle at 4:00 AM

that's a very pretty wrap. I like that it has such a wide band along the bottom. It snugs it up nicely. I've not seen one done like that before. Will have to see if my library has that book.

That is a gorgeous wrap!!!

This is lovely and you can't really tell in the picture that it is acrylic. You did a wonderful job!

You must be in the Pacific Northwest. �� Your wrap is beautiful! Jo Anna

Carie @ Space for the Butterflies said...

Oh that does look fabulously snuggly- the bottom band is such a clever idea!

Such a pretty pattern for your snuggle wrap. I know you are happy to have used some of your yarn stash too.