Did you come up with any guesses after reading Sunday's stash report? 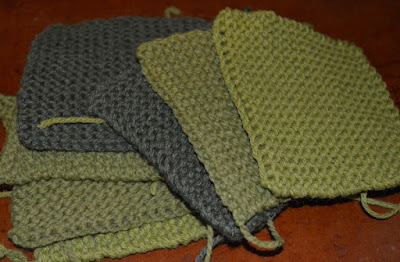 After years and years of thinking about it, I'm finally knitting an afghan. I needed another mindless knitting project, something I can pick up when my fingers are restless and I want to do some knitting but can't devote much concentration to it. Little garter stitch squares would be just perfect and these shades of green are just right for a Creeper.

These are so easy I can even work on them while I'm reading!

by Caroline Kepnes  is the sequel to You. After his ill-fated relationship with Beck, Joe has fallen a girl who's her exact opposite.  There's absolutely no personal information about Amy online. Even her phones are purchased with cash and periodically replaced. When Amy disappears with a small fortune worth of rare books from his shop, Joe follows her across the country to Los Angeles. Stalking is nothing new for him, but while it was easy to track Beck's every mood and move, Amy is almost impossible for him to find. And there are distractions....a beautiful young woman named Love and a piece of forgotten evidence from an old murder that might be the end of him. Once again, it was easy to forget that Joe isn't the type of person I wanted to be rooting for. Hidden bodies was full of twists and surprises. I don't know if there will be more books featuring Joe or not, but I'd definitely be willing to read more about him.

If you like psychological thrillers, I absolutely recommend Try Not to Breathe

by Holly Seddon. Alex Dale, a journalist who has hit rock bottom starts researching a story about communicating with coma patients and finds herself standing next to the bed of Amy Stevenson, a woman who has been lying in a bed in Bramble Ward for half her life. When she was fifteen years old, Amy was brutally assaulted and left in a coma, the crime unsolved. Over the years, Amy's mother has died and her stepfather has given her up as dead to the world. But now that she's been reminded of the crime that cut Amy's life short, Alex becomes obsessed with finding out what really happened that afternoon.

In Shards of Murder

, the second Webb's Glass Shop mystery, Savannah Webb has taken her dead father's place as judge at a local art festival. The winning artist doesn't appear at the awards ceremony and when Savannah finds her body later she becomes a suspect in the murder. One of the reasons I love cozy crafting mysteries is because they either let me read about the things I enjoy or give me vicarious experience doing something I'd never try myself. Cheryl Hollon's descriptions of Samantha's fused glasses have me wanting to sign up, but as clutzy as I am that's probably a bad idea. I'll be watching for Cracked to Death, which is due out in June.

The publisher provided me with an advance review copy. This post is linked to Stitch Along Wednesday, Patchwork Times, Yarn Along, iknead2knit.

Great colors for the afghan and a good idea to keep those fingers limber.