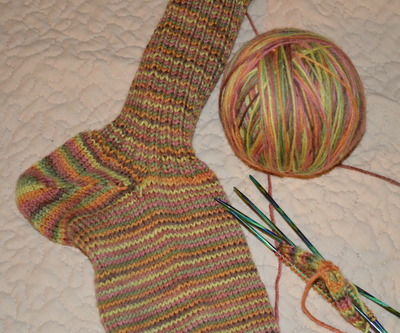 The hayride socks are coming along. I love these colors and how nicely they're behaving, making perfectly narrow little stripes without the slightest hint of pooling or flashing.

David Harwood is just dropping off some chili for his cousin. Marla has always been a little different and the tragic end of her pregnancy left her even more fragile. So when he finds her taking care of a baby that she claims an angel brought to her doorstep, David knows that something is very very wrong.  He finds a flyer in the baby's stroller with an address on it and takes Marla and the baby to that house, hoping that this isn't a repeat of the incident where Marla tried to walk out of the hospital with a newborn. It's worse than anything he could have feared. The baby's real mother is lying dead in her kitchen...and traces of her blood are found on Marla's porch. There's an awful lot going on in Broken Promise

by Linwood Barclay and not all of it is resolved by the end of the book.  I want to know why those twenty-three dead squirrels were hanging from a tree, but I'm not sure my interest will hold until the next book in the series comes out.