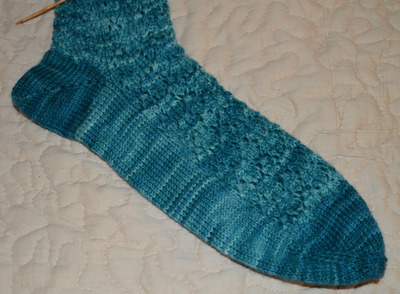 Have you ever given up on a project because materials that were supposed to be a splurge turned out to be a disaster? See those two skeins -- they're the same dyelot and they're even more mismatched in person than in the photograph. I should have called and complained when they arrived in the mail, but I didn't. I shoved it into the darkest corners of my stash and thought unhappy thoughts about alternating skeins to disguise the color differences. 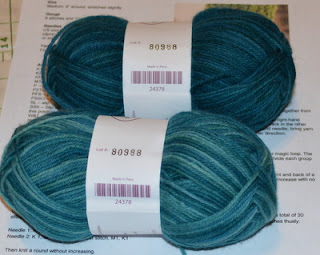 Then a couple of weeks ago I was wasting time on Ravelry and saw the pattern for Catnip Socks, Contrasting heels and toes don't hide the  color differences, but they're a lot easier than knitting round from alternating skeins while trying to keep track of the lace pattern.

The Book of Speculation

by Erika Swyler tells the story of a water damaged old book that arrives on a librarian's doorstep. Simon is a swimmer, able to submerge and hold his breath for longer than humanly possible. His mother was a sideshow mermaid, descended from a long line of women with the same talent, and all of them drown on the same day of the year. As July 24 grows closer, Simon becomes more and more concerned about his sister and what might happen to her. The plot unfolds slowly, alternating chapters between Simon in the present day and a mute wild boy who has been taken in by the travelling carnival that the logbook belonged to. It's full of magic and suspense and atmospheric details.  I read it in fits and starts over a couple of weeks, picking it up whenever I had time to immerse myself in Simon's world.

Disclosure - The publisher provided me with an ARC.

Oh, I like that pattern. Haven't been looking on Ravelry for a while, and right now the page for the pattern pdf is not available--but I'll keep trying.

(I confess, I probably would have just made something else or would have tried very hard to do stripes. But I probably would not have gotten around to contacting the company. Kind of makes you wonder if the yarn order was packed in the dark, doesn't it?)

They look great. Frustrations I have had lately with patterns online is that everything seems to require a circular needle and I hate using them. I finally found a stash of 1970s patterns that I've been using.
Ann

Is time on Ravelry ever wasted? ;)
Doing constrasting heels and toes was the perfect solution. The socks are beautiful.